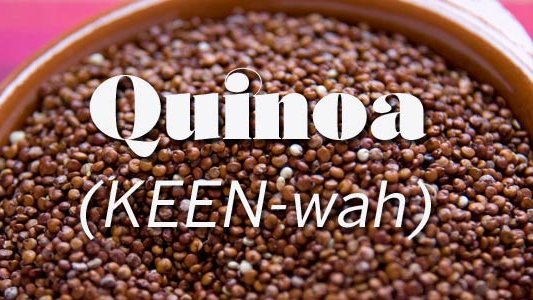 Whether you get an açaí smoothie for breakfast, order a quinoa bowl for lunch, or have an uncle who recently had angina, here’s how to say it all the right way (and feel a lot less awkward in the process).

There are few things that cause more self-loathing than fumbling over the pronunciation of something you order everyday—or say when you’re trying to sound smart. Whether you get an açaí smoothie for breakfast, a quinoa bowl for lunch, or have an uncle who recently had angina, here’s how to say it all the right way (and feel a lot less awkward in the process).

This antioxidant-packed Amazonian fruit tastes delicious in smoothies or breakfast bowls—and confounds most people trying to order it.

Technically it’s not wrong to call chest pain caused by reduced blood flow to the heart an-JIE-nuh, but do you really want to?

Some say this licorice-flavored seed can ease coughing and help clear up congestion. Some also say it as a-niece. Nope.

Don’t fretta if you call this toast-and-tomato appetizer “shetta”—just make a note before you head on a trip to Italy.

This autoimmune condition in which gluten damages the small intestine is singular, not plural.

You don’t want it to sound like you’re saying “pole” when referring to a smoked jalapeno pepper (or your favorite burrito joint).

When talking about this inflammatory bowel disease (IBD), pretend there’s a “w” in there.

RELATED:11 Things Not to Say to Someone With Crohn’s Disease or Ulcerative Colitis

Russians say it with emphasis on the second part of the word, so if you want to sound legit when referring to your probiotic drink, this is the best way to pronounce it.

When you’re describing your first menstrual cycle, it shouldn’t rhyme with the name of a butterfly.

RELATED:10 Things That Mess With Your Period

Order this Vietnamese noodle soup as “foe” and your waiter will still probably know what you want—but might as well be a friend to him or her and say fuh.

This whole grain that’s not really a grain (it’s a seed!) is known for packing protein, iron, and fiber, and for being incorrectly pronounced as kwin-OH-a, or KWEEN-oh like in this Bud Light commercial.