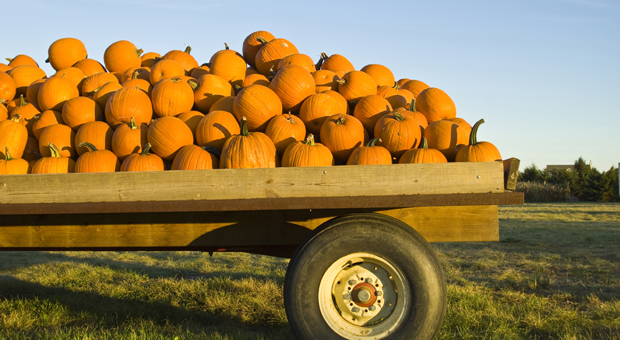 Iâ€™m pretty pumpkin obsessed. I buy canned pumpkin year-round so I can regularly whip up pumpkin smoothies, and I sprinkle pumpkin pie spice onto lots of things, including oatmeal, sweet potatoes, and warmed fruit. Basically, the fall season isnâ€™t long enough to satisfy my passion for pumpkin, and Iâ€™m not alone.

A few years back New York magazine deemed pumpkin the new bacon, as pumpkin-inspired foods and drinks exploded in popularity. Trouble is, most of them arenâ€™t so healthy (bagels, cheesecake, ice cream, sugary lattesâ€¦), and some only include pumpkin flavoring, rather than the real deal.

Actual pumpkinâ€”either fresh roasted, or unsweetened cannedâ€”is a true superfood. This member of the squash family is loaded with immune-boosting vitamin A and filling fiber, and a half cup of puree contains less than 50 calories. Itâ€™s also more versatile than you think.

Here are five satisfying, but healthy ways to enjoy it (some may be unexpected), so you can truly reap the nutritional benefits.

In a blender, combine one half cup canned pumpkin with one cup of unsweetened coconut milk, a tablespoon of either coconut butter or almond butter, a teaspoon each of pumpkin pie spice and organic maple syrup, a scoop of pea protein powder, and 3-4 ice cubes. Whip until smooth. Itâ€™s my version of liquid pumpkin pieâ€”heavenly!

After making your oatmeal with hot water, fold in two tablespoons of warmed canned pumpkin, mixed with 1 teaspoon of organic maple syrup and a half teaspoon of pumpkin pie spice. Easy breezy.

RELATED:Â Oatmeal Recipes for Every Day of the Week

Roast fresh pumpkin in the oven at 350Â° F for about 45 minutes or until itâ€™s tender all the way through. Cool and cube, discarding the skin. In a small saucepan combine a half cup of sliced grape tomatoes with one tablespoon of extra virgin olive oil, two tablespoons minced yellow onion, and a quarter cup of chopped green bell pepper. Saute over low heat until veggies are tender. Add a half cup organic low sodium vegetable broth, a quarter cup of water, tablespoon of fresh chopped cilantro, teaspoon of minced garlic, and an eighth of a teaspoon each of ground cayenne and black pepper. Bring to a quick boil and then reduce to a simmer and stir for 10-12 minutes. Add a half cup each black beans and cubed pumpkin, stir to heat through, and serve. I love this dish because itâ€™s hearty, but not heavy.

In a small saucepan, sautÃ© two tablespoons of minced yellow onion and teaspoon of minced garlic in two tablespoons of low sodium organic vegetable broth until onions are translucent. Remove from heat. In a blender combine a half cup of canned pumpkin with the onion mixture, along with half cup unsweetened coconut milk, quarter cup of organic low sodium vegetable broth, and a half teaspoon of curry seasoning. Whip until smooth, transfer to saucepan, bring to a quick boil, reduce to a simmer for 5-6 minutes, and serve. A healthy way to warm up on a chilly day.

In a food processor, combine a half cup of chickpeas with two tablespoons each of tahini and canned pumpkin, along with a teaspoon of minced garlic, tablespoon of fresh squeezed lemon juice, and a sixteenth of a teaspoon each cayenne pepper, black pepper, and cumin. Puree until smooth and serve with raw or roasted veggies, like broccoli and cauliflower. A pumpkin twist on a go-to favorite!