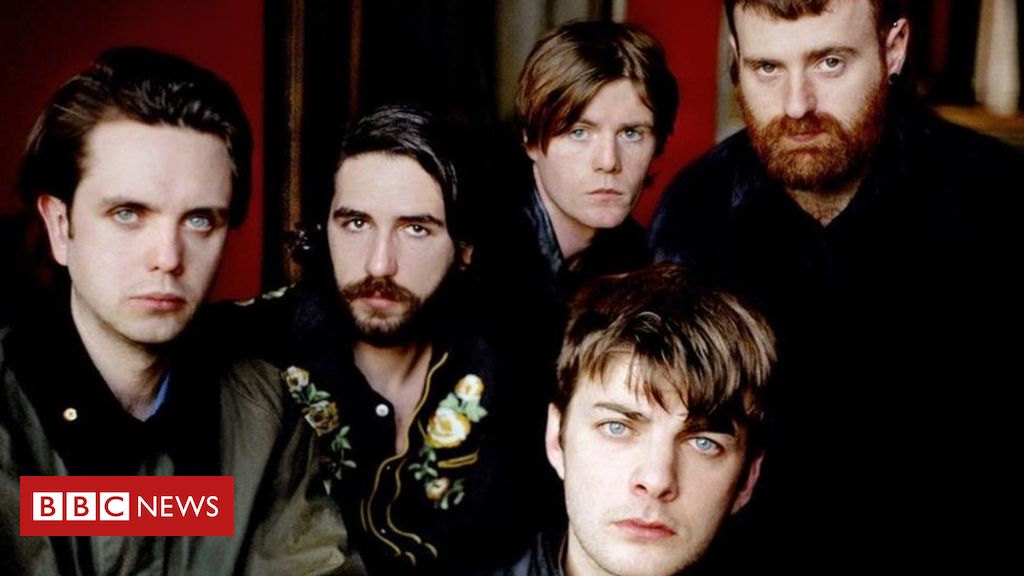 For the last 12 months, Fontaines DC have been on an unstoppable rise.

Their debut album Dogrel, a vivid and raucous portrait of growing up in Dublin, landed on the Mercury Prize list; while all of its singles made the A-list at BBC 6 Music.

By the end of 2019, they were celebrating several “album of the year” accolades with a sold-out UK tour, culminating in two triumphant homecoming shows at Dublin’s Vicar Street.

Not bad considering that, a year earlier, the band were still playing in pubs.

The success “never lost its ability to blow me away, but I tried not to let it,” says frontman Grian Chatten.

“We did our best to bury our heads in the sand and not take too much notice of any of the reviews – and luckily enough, we came out of the first album still ourselves.

“That’s why I can proudly say about our second album: It’s written by the same [expletive] people.”

That album was written and recorded with almost indecent haste – with sessions wrapping up in Los Angeles last October, just six months after Dogrel’s release.

The sun-soaked Californian vibes inevitably seeped into the recordings, and the quartet’s scrappy riffs are newly decorated with surprising (but welcome) bursts of Laurel Canyon harmonies.

“We really got into harmonising when we were doing these long drives across America,” says Chatten.

“We’d always tried to figure out exactly what the Beach Boys were doing on their tunes. We wanted to be able to sing so we didn’t need instruments. Then, wherever we were, we could have a few drinks in the pub and just go for it.”

Practicing harmonies also turned out to be a lifeline for the five-piece, as life on the road took its toll.

The band had to cancel several gigs last summer for unspecified “health issues“, and Chatten now admits he’d accessed some “dark places” in his psyche as the tour progressed.

“Our schedule was pretty badly-organised,” he says, “to the extent that we’d actually have hour-long sleeps rostered in.

“If you’re on your hundredth gig of the year and you haven’t slept much, the worst thing you could possibly do for your own head is do a bad gig.

“So in order to feel some sort of connection, what I do is I often bring myself to places mentally when I’m playing a song that are actually quite toxic.

“Sometimes it can be quite affecting because you find yourself in a very uncomfortable place, out of pure desperation for a connection with the song.

“But sometimes it overflows and it becomes a bit too much. I’ve definitely gone too far in what I’ve made myself think about on stage.”

And that’s where the harmonies came in.

“I think subconsciously we were reaching out to each other while we were practicing and writing little harmony parts in the back of the van,” the singer says.

“It’s an amazing feeling. It gives you a great sense of community – maybe because the singing culture we would have seen growing up, the Dubliner-style pub singing, was so familiar.”

You can hear the band’s vocal prowess on their new single, A Hero’s Death, where staccato “bah bah bahs” swirl dreamily around a slashing guitar riff.

The song is simultaneously uplifting and sinister, as Chatten delivers some life advice (“tell your mother that you love her, and go out of your way for others”) before returning to the same, insistent phrase: “Life ain’t always empty“.

It’s unclear whether he’s repeating the mantra as a statement of fact, or an attempt to convince himself of its truth.

“I’m not sure myself,” he confesses. “I purposefully keep the things I write open to interpretation, even to myself.”

Still, the fact that the chorus was inspired by the “terrifying” repetition of advertising slogans gives you a small clue about his intentions.

The song was released last week, accompanied by a video starring Aiden Gillen – aka Game Of Thrones Petyr “Littlefinger” Baelis – playing a charismatic chat show host whose life spirals out of control when he finds himself overshadowed by his puppet side-kick.

But his presence isn’t the result of some marketing-driven record label spending spree, Chatten says.

“We didn’t have much of a budget, but he just said we could buy him a pint.”

The video kicks off the build-up to their second album, due out in July, which is also called A Hero’s Death.

The title is a tongue-in-cheek way of acknowledging the “difficult second album syndrome” that’s derailed countless bands over the years.

“I found the idea quite funny – because I’m half-expecting people to dislike [the album],” says Chatten. “So the idea of calling it A Hero’s Death is kind of laughing about that and setting people up for disappointment.”

In fact, the title track was inspired by Chatten’s own anxiety over the record: He wrote the lyrics the very first time he listened to their debut, “just to allay any fears of not being able to do it again”.

The rest of the album came just as easily, leaving the band in the unusual-for-2020 position of having the sequel to a hit record ready in less than 12 months.

“It’s easier to write than not to write,” says Chatten, matter-of-factly. “There was no careerist element to it. We were under no pressure to release a second album.

“If we’d said everything that we had to say in one album, then we wouldn’t have bothered making a second.”

Despite the quick turnaround, the band have evolved over the last year – and not just by adding harmonies.

Because while Dogrel was a scabrous, if romantic, portrayal of Dublin – “a pregnant city with a catholic mind” – the follow-up has broader horizons, a decision borne of necessity, rather than choice.

“I would have liked to have more about Dublin,” Chatten admits. “I love living in Dublin and I think Dublin is an incredibly inspiring place – but I don’t have the licence to write about it, because I haven’t really been there for nearly two years now.

“So I wrote about my own experiences, the things that happen in my imagination and vignettes of other people, with maybe more exacerbated situations than the ones I’m going through.”

The album is destined for release in July, and the band had been expecting to debut the new songs at festivals around Europe.

Of course, that’s now on hold – but Chatten is philosophical about releasing the album during the lockdown.

“It is kind of strange it coming out now, when there’s not much face-to-face contact,” he says.

“Last time, we were half-way through a tour when the album came out, and this time we’re at home.

“It’s kind of like being around for the second kid and not being there for the first.”

A Hero’s Death is due out on 31 July via Partisan Records.