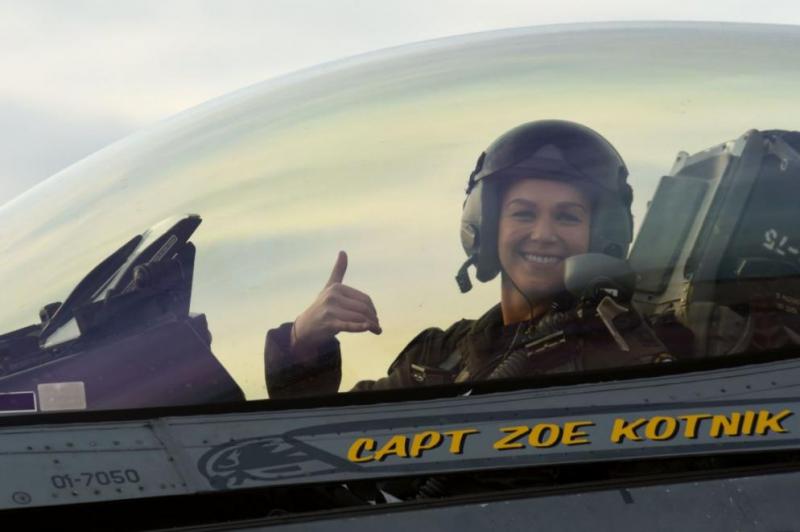 Kotnik, 30, has logged more than 1,000 flying hours in her eight years of military service, and was certified last Tuesday by Gen. Mike Holmes, commander of Air Combat Command, at Joint Base Langley-Eustis, Va.

“What I’m looking forward to most is the potential to have an influence on younger generations,” Kotnik said in a news release. “I know firsthand how impactful airshows can be and what a difference it makes to young people to see just one example of what they too can do and who they can become. I hope to be a source of inspiration and motivation they can draw from to apply in their own lives.”

The new commander underwent extensive training, including four certifications, off-station training flights and more than 30 practice missions, while assigned to the 55th Fighter Squadron at Shaw Air Force Base, S.C.

The Viper team posted on Twitter a video and photos framed and lettered like a comic panel.

“In that instant … She knew she could fly her F-16 higher, further and faster than anyone else,” reads text that appears in the images.

“Higher, further, faster” is a reference to the new film, Captain Marvel, which features Brie Larson in the role of the titular superhero, whose alter ego, Carol Danvers, is an F-16 pilot in the Air Force.

Kotnik joined 80 of her fellow female pilots at Edwards Air Force Base in California on Friday.

Kotnik was born in Poynette, Wis. Her uncle was skydiver and airshow hall of fame pilot Charlie Hillard, according to her Air Force bio. Her mother was also a private pilot.

As a child, she became interested in jet flying when she saw saw a NASA T-38 Talon supersonic jet trainer pull up at an airshow. The pilot took off her helmet and revealed she was a female fighter pilot.

“It was at that moment that I realized, ‘Oh my god, that’s exactly what I can do,'” Kotnik told Live Airshow TV last fall in a video interview. The pilot shut down the engines, popped the canopy and pulled off the flight helmet, revealing a female fighter pilot.

She graduated from the Air Force Academy in 2011 and earned her wings in 2013.

Kotnik’s team, which is in preseason training, is slated to perform its first show in Key West, Fla., on March 30 and 31, according to a schedule posted on Twitter.

“These shows allow us to demonstrate the capabilities of the F-16 to a world-wide audience while highlighting the work of the Airmen who keep the Viper flying,” said Master Sgt. Chris Schneider, the F-16 Viper Demonstration Team superintendent. “It’s not every day people get the chance to hear the sound of freedom roaring over their heads or watch a team of maintainers working together to make it happen.”

Last month, Maj. Rachael Winiecki became the first woman to complete a flight test of an F-35 Lightning II at Edwards Air Force Base in Southern California. She is a developmental test pilot with the 461st Flight Test Squadron