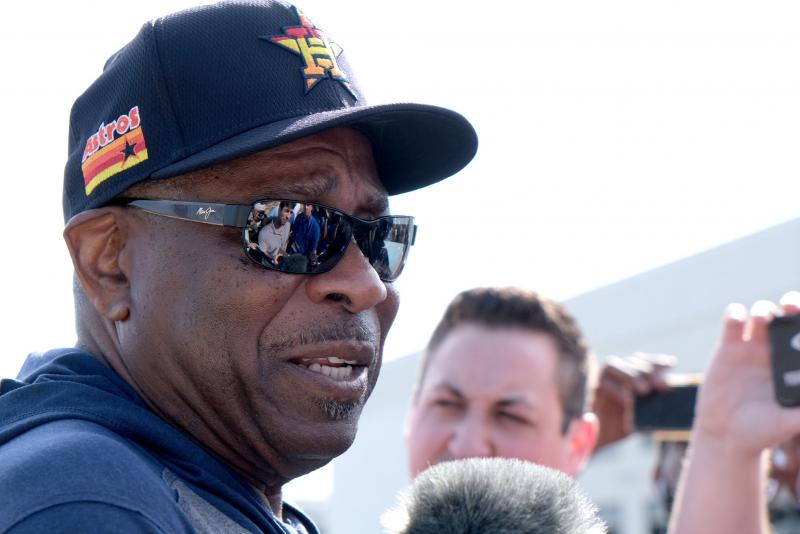 Baker joined the franchise in an unorthodox manner, replacing the fired A.J. Hinch.

Hinch and Astros general manager Jeff Luhnow both lost their jobs in January after being suspended by Major League Baseball for their roles in a sign-stealing scheme.

An increased media presence at Astros spring training in West Palm Beach and heckling fans serve as constant reminders of the sign-stealing scheme, which the players used during their 2017 World Series run.

The Astros also appeared in the 2019 World Series and should be title contenders again in 2020. Bregman and his teammates are trying to write a new narrative and help Baker end his World Series drought.

“It’s the one thing on our mind, getting him a World Series,” Bregman said Wednesday in West Palm Beach.

Baker, 70, is the oldest manager in baseball. He won a World Series as a player in 1981, but hasn’t had such luck in his 22 years as a manager. The closest he got was when his San Francisco Giants lost to the Anaheim Angels in seven games in the 2002 World Series.

“We all want to win a World Series, but it would be special for him,” Astros shortstop Carlos Correa said. “He has been around the game for a long time. It would be great to make that happen for him.”

The Astros have won at least 100 games and have appeared in the American League Championship Series for three consecutive seasons. While the team lost some star talent during that span, All-Stars like Bregman, Correa, Jose Altuve, George Springer and Justin Verlander still crowd the clubhouse.

Baker said he is trying to make the team feel as comfortable as possible, despite recent media scrutiny and managerial and front office changes.

Learning the roster is always the first move for Baker when he joins a new team. He then seeks out the team leaders, studying how they communicate with fellow players as he learns the dynamic of the baseball family.

The Astros have had the trio of Springer, Correa and Altuve on the roster since 2015. Bregman made his debut in 2016. That continuity has formed familial-like bonds in the Astros’ clubhouse, making Baker seem like a stranger when he first arrived despite his ample baseball resume.

“Sometimes you just have to let it happen and let it be,” Baker said of the dynamic of the team before he arrived. “A lot of this was in effect before I even got here. All I’m doing is not trying to make a bunch of changes and trying to make them feel as comfortable as possible and let them know everything in life is temporary.”

“It seems like it’s a forever situation, but it’s not.”

Bregman said you can’t tell Baker is the oldest manager in the game because of his sense of humor. Baker earned a reputation of being a player’s manager before he joined the Astros. His new players say he fit in with the team right away because he tries to blend in instead of constantly acting as an administrator.

“Being a player’s manager just means you respect your players. You treat them like men and human beings,” Springer said. “You understand we are human. We are going to make mistakes. We aren’t always going to feel good. We aren’t machines.”

Baker made his debut as a player with the 1968 Atlanta Braves, playing alongside Hank Aaron, Felipe Alou, Phil Niekro, Orland Cepeda, Joe Torre and Tito Francona.

As a rookie, he was starstruck while watching opponents like Roberto Clemente and Bob Gibson. He uses something Aaron told him then to help his rookie players fit in now.

“The feeling of belonging is big,” Baker said. “When I was a rookie, I was peeking at Roberto Clemente. Hank said, ‘Don’t peek at him. Go over and introduce yourself to him because you are going to chase his balls down [in the outfield].’

“Guys put their uniforms on the same way you do, no matter what the name on their back is.”

Stories like that are a common theme for Baker. He is a walking baseball encyclopedia with sprawling managerial and player connections that span for nearly a half century.

“He’s really good at easing a lot of stress and tension in the clubhouse,” Astros outfielder Josh Reddick said. “He makes us laugh a lot.

“That’s one thing you don’t really see in a manager coming in. … He gets guys off their toes and can diffuse the situation, so to speak. He is really good at bringing it back to being light and having a good time.”

The Astros host the New York Mets in a spring training game at 6:05 p.m. EST Friday at FITTEAM Ballpark of the Palm Beaches in West Palm Beach.