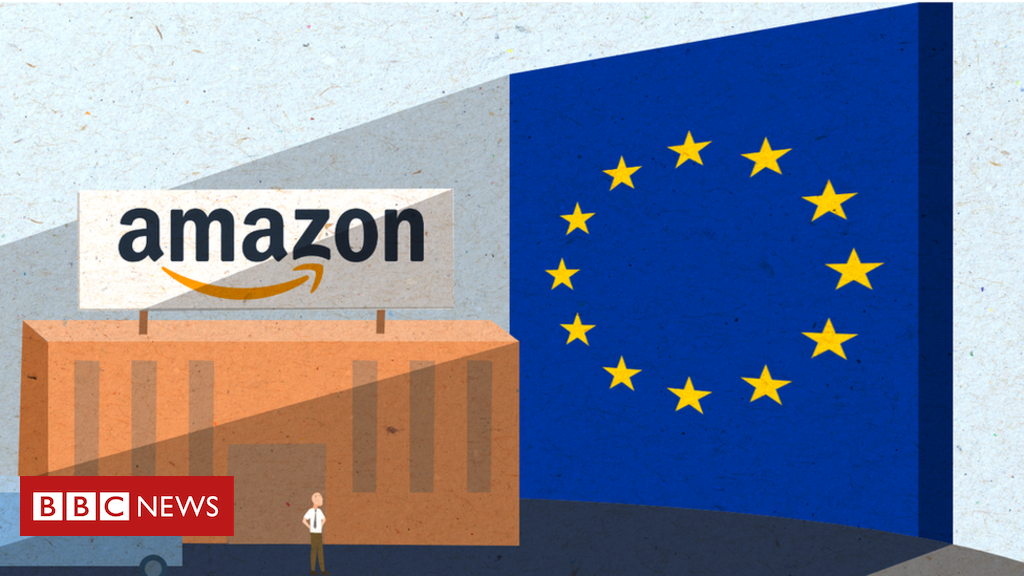 Covid-19 has not been a harbinger of doom for Amazon, unlike the case with many other firms.

It turns out online retail isn’t a bad space to be in when all the shops are shut. Jeff Bezos’ mantle as the richest man on the planet seems safe, for now.

But around the world, governments are looking at Amazon and asking whether the tech giant is – well – too big.

Does it use its dominant position unfairly?

The EU now looks set to charge Amazon for anti-competitive behaviour. This could cost Amazon a lot of money and could alter the shopping experience it offers customers.

What is the EU doing?

Central to the EU’s concerns is Amazon’s dual role.

It runs an online store and also sells its own products on that platform. The criticism is, that it’s both the player and the referee.

Speaking to the BBC last year, the EU’s competition enforcer Margrethe Vestager said: “We never accept in a football match that one team was also judging the game”.

Much of the EU’s concerns are thought to centre around the data that Amazon has access to and how it uses it. It can see sensitive commercial information on third-party products – like volume and price.

The big question is – is the company using that data to give Amazon’s own products an unfair advantage?

For example, The Wall Street Journal has reported that Amazon accessed third-party seller data to develop its own products.

In other words, Amazon understands what sells well on its platform – and can then simply replicate what sells best.

There are other accusations too.

If you buy a product on Amazon, you’ll get other similar products suggested to you in a pop-up called a ‘Buy Box’.

If you’re in the business of selling stuff, having your product on Amazon’s Buy Box is – to put it mildly – a good thing.

But does Amazon unfairly promote its own products at the expense of third parties? The EU is sniffing around this area.

What does Amazon say?

The general defence is that there are plenty of companies that act as both a shop and supplier. Tesco and Sainsbury’s both sell their own labelled products in their stores, for example.

They also argue that – far from being anti-competitive – private-label products are good for customers and offer more choice.

Amazon told the BBC: “We strictly prohibit our employees from using non-public, seller-specific data to determine which private label products to launch”.

The company also wanted to point out that it already publishes data on how well some products sell online (just go to the ‘Movers and Shakers’ section of the website).

How will this affect you?

Critics of Amazon believe this is a moment that will set the boundaries of what is legally acceptable in the online market place.

But it’s still not totally clear – even if Amazon were to be fined – how this would affect Amazon’s business mode or shopping online more generally.

Augustin Reyna, from the European Consumer Organisation, told the BBC: “The question is more, in the medium-to-long term, if Amazon were allowed to continue with these practices, consolidating its market position, it would be able to restrict choice and push up prices.”

A charge sheet could be published as soon as this week.

However, the EU Commission is tight-lipped – it will currently only say that the investigation is “ongoing”.

In theory Amazon could be fined 10% of its global revenue if found guilty of breaching competition law – about £15bn ($ 19bn).

Even for Amazon that would be an eye-watering sum.

But don’t expect this to happen overnight. It’s unlikely we’ll get a ruling until next year at the earliest. And even if Amazon is fined, it can – and almost certainly would – appeal.

Well, no. Other countries have taken an interest in the EU’s muscular approach to big tech.

In 2017 for example, the EU fined Google £2.1 billion for allegedly burying Google searches for rivals.

Rather than being enamoured, seduced even by the tech titans, the EU has been distinctly unimpressed with some of their behaviour.

And this is rubbing off. Over the weekend it was reported that officials in California and Washington are also reviewing Amazon’s business practices with respect to third-party sellers.

A string of other anti-competition investigations are also being carried out in the US looking at Amazon and the other big tech firms, like Facebook and Google.