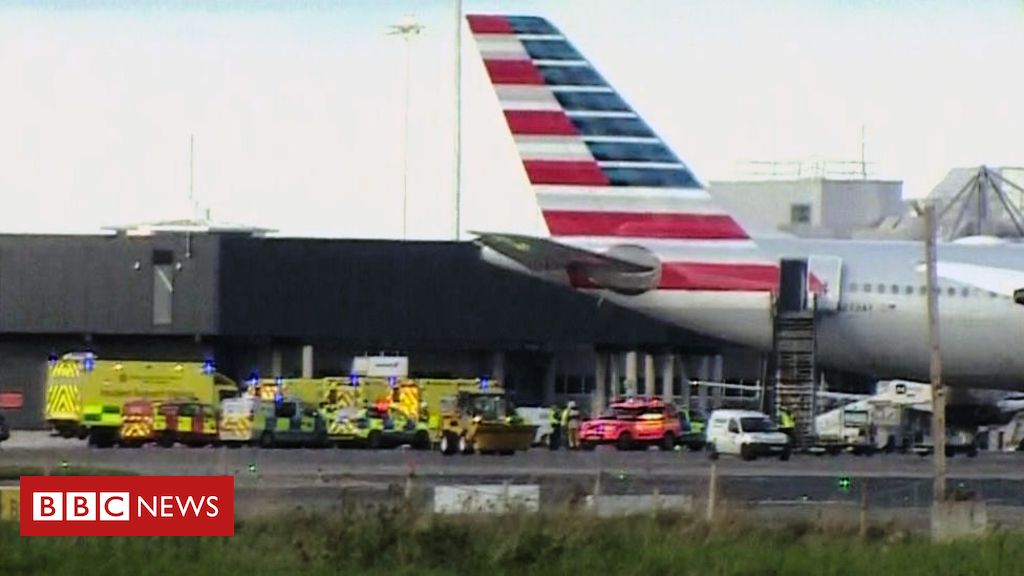 American Airlines now says a spilled cleaning product did not cause an odour that led to a flight being diverted when two cabin crew members passed out.

The airline initially made the claim after a flight from London Heathrow was diverted to Dublin on 21 October.

However, the aircraft’s maintenance records and other evidence, obtained by BBC News, cast doubt on that theory.

Now American Airlines says its maintenance team has established that a cleaning solution was not the cause.

The odour was so serious that a passenger and both of the crew members who fell unconscious were taken to hospital when the plane landed in Dublin.

Records show part of the aircraft had been leaking oil prior to the flight.

BBC sources say it is likely the leak caused toxic fumes to enter the cabin. However, American Airlines denies that.

Initially the airline said the plane had diverted “due to an odour caused by a spilled solution in the galley.”

An internal American Airlines report on the incident on 21 October stated that “dish soap in a bottle caused two flight attendants to get medical attention and one passenger”.

Dish soap is the American term for washing-up liquid.

An American Airlines insider, who is not authorised to speak to the media, said it was “inconceivable” that dish soap, or any other cleaning product approved for use on aircraft, could cause two people to pass out.

The airline says the aircraft involved was “thoroughly inspected” after the incident by its “highly-skilled” maintenance team who conduct “an in-depth investigation… whenever a cabin odour event is reported.”

After the BBC published evidence which cast doubt on the claim that the spilled cleaning solution was the cause, American Airlines issued a clarification.

It said its maintenance team had established the cleaning solution “was not the source of the odour, which led to the diversion of this flight.”

American Airlines says: “Cabin odours are a priority for American’s leadership team at the highest level of the organisation.”

Documents obtained by BBC News also showed there was an oil leak on part of the aircraft days before the incident, which could have been the cause.

The part of the plane that was leaking oil is called the Auxiliary Power Unit, or APU.

Three days before the aircraft was diverted to Dublin, an engineering maintenance report stated that its APU showed a “high oil consumption”.

Another American Airlines maintenance document stated that the APU was inoperable, and determined that it should be repaired in the coming days.

A “noxious odour” which resulted in “eye and throat irritation” was also recorded on the same plane on 23 October, two days after the flight from Heathrow was diverted to Dublin.

In another report from the same day, the APU on the plane is then described as “wet with oil”.

American Airlines claims the odour, which caused two cabin crew to pass out, “was not related to the APU” because the unit was “not operational during this time period and did not operate during this flight”.

However, a document written by aircraft manufacturer Airbus clearly states that an APU, which has leaked oil, can contaminate the air supply in the cabin, even when the unit is switched off.

That’s because if oil leaks from the APU it can spill into the ducting of the plane’s air conditioning system.

American Airlines said: “It cannot be emphasised enough that the health and welfare of our crews and customers continues to be our top priority.

Now that the spillage of a cleaning product theory has been discounted, we asked the airline what caused the incident.

American Airlines did not give a reason but said the aircraft in question has since flown 39 commercial flights with no reports of odours.

But it reiterated that it believed that “in the case of this aircraft and the diversion to Dublin, there is no connection to the APU or bleed air from the APU.”