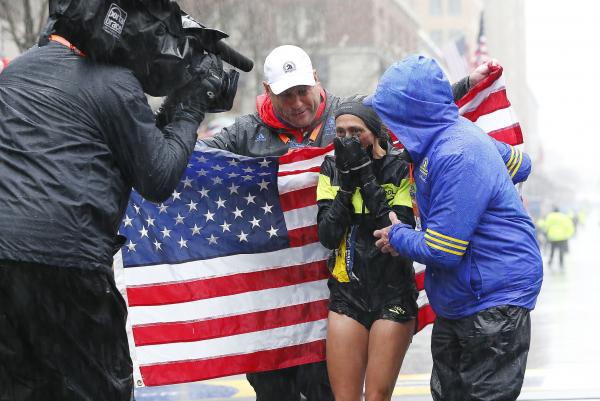 Runners packed the streets for the coldest Boston Marathon in 30 years. A field of 30,000 braved temperatures in the mid-30s and wind gusts of up to 32 mph, while dodging harsh rainfall.

Linden is the first American woman to win the race since Lisa Larsen Weidenbach claimed first place in 1985. She navigated the Boston asphalt in 2:39:54. Fellow American Sarah Sellers crossed the finish line in second place.

Kawauchi also ended a long drought for Japan. He finished the marathon in 2:15:58, winning the country’s first Boston Marathon since 1987. He passed 2017 champion — Geoffrey Kirui of Kenya — down the stretch.

“I never gave up,” Kawauchi told reporters.. “I knew [Kirui] was up there. I could see him. I ran my own race and I ran him down.”

Kawauchi told WBZ-TV he was “freezing cold” after the race, but said the conditions were the best he could possibly run in.

Canadian Krista Duchene finished in third place and was the only non-American runner to place in the top five. Rachel Hyland finished fourth and Jessica Chichester finished in fifth place. The United States had seven of the top eight finishers in the women’s standings.

“I don’t have the right words,” Linden told reporters. “I’m thrilled. It’s supposed to be hard.”