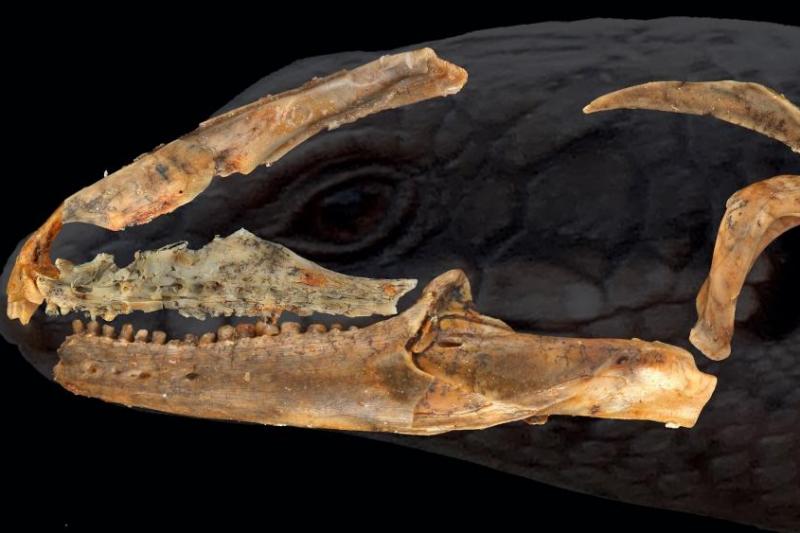 May 1 (UPI) — Paleontologists in Australia have unearthed the complete skeleton of an ancient lizard, an early relative of modern blue-tongued and social skinks.

Analysis of the remains — the most complete lizard fossil yet discovered in Australia — suggests the 15-million-year-old reptile was remarkably similar to modern lizards.

“This creature looked like something in-between a tree skink and a blue-tongued lizard,” Kailah Thorn, PhD student at Flinders University, said in a news release. “It would have been about 25 centimeters long, and unlike any of the living species it was equipped with robust crushing jaws.”

Scientists conducted DNA and anatomical analysis of ancient and modern skinks to pinpoint the timing of the new lizard’s evolutionary origins. Paleontologists determined the lizard emerged from the skink genus Egernia around 25 million years ago.

“The new fossil is unusually well-preserved, with much of the skull, and some limb bones, all from a single individual,” Thorn said. “It belongs to the genus Egernia, a modern species in this group which are often called ‘social skinks’ and are known for living in family groups, sharing rocky outcrops and hollow tree stumps.”

Though similar to modern skinks, the ancient lizard boasted a unique jaw and set of teeth — a broad jaw and rounded teeth conducive to crushing.

The ancient lizard was found among fossil deposits in the Riversleigh World Heritage site, located in northwest Queensland. Researchers named the new lizard species after Anna Gillespie, a paleontologist at the University of New South Wales, who has led dozens of excavations inside the heritage site.

“I have been preparing the Riversleigh fossil material for quite a few years now and lizard bones are rare elements,” Gillespie said. “When the jaw appeared and was quickly followed by associated skull elements, I had a good feeling it would be a significant addition to the Riversleigh reptile story.”