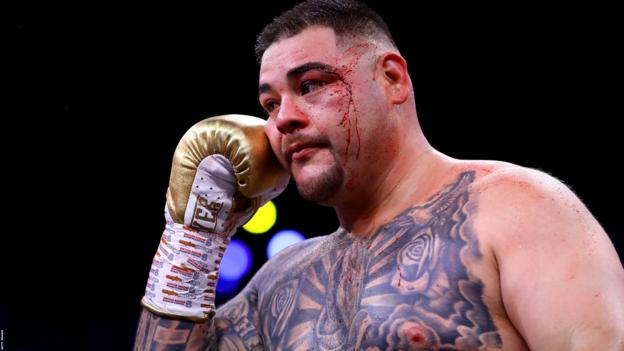 Andy Ruiz Jr said three months of partying and a lack of proper training left him “overweight” for his world title rematch with Anthony Joshua.

Ruiz, 30, was comprehensively out-pointed in Saudi Arabia, six months after shocking the boxing world by stopping Joshua in New York.

The Mexican vowed he would be “a lot better” if he gets a third fight.

“For this fight I was overweight. I didn’t move how I wanted to.”

‘The partying got the best of me’

Ruiz, the second-heaviest world champion in heavyweight history behind Nikolai Valuev, gained 15lb since his win over Joshua, who is now a two-time champion in the glamour division.

He scaled 20st 3lb at Friday’s weigh-in and, while he was brave and durable as Joshua ran out a unanimous points winner, he never threatened to repeat his incredible upset from earlier in the year.

Many had questioned if a lifestyle which saw him buy new homes and cars, and make countless media appearances in the aftermath of his win, could prove costly.

He appeared regretful and apologised to his trainer Manny Robles and father Andres at his post-fight news conference but was applauded out at its conclusion.

The former champion claimed he had initially lost weight after his win but added: “I put on the weight and it was my mistake. No-one knows about the training we had. We did the best we can.

“Being a champion for the first time, being over here and there and missing training, it was hard.

“For the trilogy I will be a lot better. I want to redeem myself in Saudi Arabia.”

Trainer Robles has stressed Ruiz had a full three-month camp but that would have still left more than three months between his win over Joshua and the start of preparations.

“I don’t want to say the three months of partying or celebrating didn’t affect me, as to tell you the truth it kind of did,” Ruiz added.

“There’s no excuses. The partying got the best of me. The next fight is going to be a lot different.

“People are still doubting me. I am still a dangerous fighter to anyone in the division. At 100% I can dominate anyone in the world.

“You best believe I am going to come back and be the heavyweight champion of the world once again.”