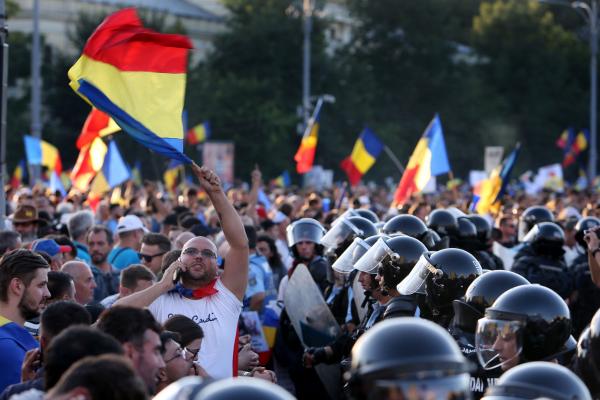 Tens of thousands showed up for the rally, which called on Romanians living abroad to return home to protest what they say is a corrupt government.

Chief complaints among the demonstrators are legislative changes that many say will weaken the rule of law.

“We want democracy and laws that defend citizens, not politicians,” Moise Maracine, a protester who flew from Britain, where he lives and owns a business, told The New York Times.

As angry crowds shouted for government officials to resign, demonstrators clashed with officials. Some threw bottles and rocks at the police, prompting law enforcement to fire tear gas into the crowd. More than 240 people were injured.

Romania’s President Klaus Iohannis condemned rally, saying in a statement Friday demonstrators’ actions were “strongly disproportionate with the demonstrations of the majority of people in Victoria Square.”

Fridays protest was the largest in months, coming about 18 months after a February 2017 demonstration in Romania when a half-million people took to the streets to protest an emergency decree that decriminalized low-level corruption.