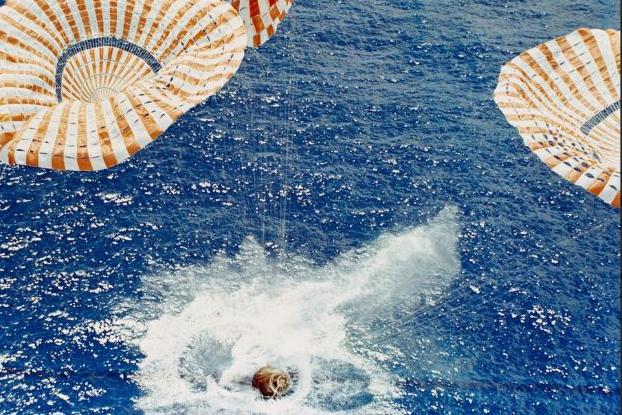 ORLANDO, Fla., April 17 (UPI) — The 50th anniversary of the Apollo 13 splashdown on Friday marks the successful end of a heroic effort to save the aborted moon mission from disaster in space.

The rescue of three astronauts proved the efficacy of NASA’s training and talent to overcome a life-threatening oxygen tank explosion 200,000 miles from Earth and served as an example for future generations of space engineers.

“We’re about to live the moon missions over again, but we know from the past we can work through problems that we may have,” said Mike Cianilli, manager of NASA’s Apollo Challenger Columbia Lessons Learned Program.

The capsule splashed down at 2:07 p.m. EDT in the South Pacific near Samoa. The crew used the lunar module as a lifeboat during the journey home, and pieces of that crashed into the ocean closer to New Zealand.

With navigation systems also knocked out, astronauts Jim Lovell, Fred Haise and Jeff Swigert pulled off the final maneuver to re-enter the atmosphere by using the position of the sun, which teams of engineers on the ground had advised.

The effort, according to President Richard Nixon, was a reminder of “the extraordinary concert of skills, in space and on the ground, that goes into a moon mission.”

In a press conference after splashdown, the astronauts praised the coordination and initiative of teams on the ground.

“It’s amazing in a way that people can respond so fast to get this job done,” Lovell told the media.

Training for the unexpected was vital to the crew’s success in addressing shortages of oxygen, power and water among other things, Cianilli said, adding that other organizations, including the Centers for Disease Control and Prevention, have tapped into the Lessons Learned program.

Such training for Apollo programs included knowing the systems on the spacecraft “backward and forward, so they were able to troubleshoot very quickly,” Cianilli said.

“The work they were doing was incredible,” said Feist, who developed a website platform that matches audio, visuals, data and other observations from the entire Apollo 11, 13 and 17 missions.

After the accident, NASA modified the service module electrical power system to prevent a repeat, redesigned the oxygen tanks and added a third tank, among other fixes, according to NASA’s official history of the program.

Celebrations for Apollo 13’s recovery didn’t show the same exuberance as Apollo 11 or 12 moon landings, but Swigert and Lovell were treated to a ticker-tape parade in Chicago. Haise was absent due to illness, but he got the parade treatment in his hometown of Biloxi, Miss.

Cianilli said there’s a strong connection between Apollo 13 and NASA’s current Artemis program, which has a goal of returning Americans to the moon by 2024.

“It’s not just words,” Cianilli said. “We are unbelievably committed to ensuring safety, and that’s how we’re going to get back to the moon.”