Observatory engineers worked Tuesday to secure the partially wrecked facility, which was damaged the day before, said managers of the Puerto Rican landmark, who are based at the University of Central Florida in Orlando.

No injuries were reported, in large part because the damage occurred about 2:45 a.m. when no one was present.

“We’ve informed the science community that we’re not doing any astronomy observation for at least two weeks,” said Ray Lugo, director of the university’s space institute.

“Our first priority is to put the dome, antennae and suspended platform in the most secure place in case we have a storm. Once that is done, we’ll inspect the remaining cables.”

The team at the facility does not know yet whether the cable break is related to recent earthquakes or hurricanes, Lugo said.

The observatory had plans to replace another, larger cable that was repaired years ago after an earthquake. This week’s accident wasn’t related to that issue, he said.

The space telescope, which is owned by the National Science Foundation, suffered up to $ 8 million in damage when Hurricane Maria strafed the island in 2017. It also came through a series of earthquakes this past winter without major damage.

Scientists at the facility are grateful no one was injured, said Anne Virkki, an astronomer who studies near-Earth asteroids there.

“I, like the rest of the observatory staff, have felt horrified and sad of what happened since we heard about it,” Virkki said.

The facility received two grants of more than $ 14 million for repair and upgrading after Maria. But Arecibo’s annual funding from the National Science Foundation has been slashed.

The broken cable, about 3 inches in diameter, was an auxiliary support that helped to stabilize the structure, Lugo said.

When it snapped, it caused a 100-foot-long gash in the 18-acre reflector dish and damaged the platform that is about the size of a six-story building hanging from three towers as big as skyscrapers.

The large, dramatic structure nestled in the island’s hilly interior is known as a film location for such movies as such as 1995’s GoldenEye and Species, and 1997’s Contact. Two scientists using data from the dish have won Nobel Prizes.

Astronomy conducted at Arecibo over the years has included the study of gravitational waves, possible signs of extraterrestrial life, asteroids, the Earth’s ionosphere, pulsars and interstellar hot gas.

Such work led to the 1993 Nobel Prize in physics for the discovery of a binary pulsar by scientists Russell Hulse and Joseph Taylor, which provided the first evidence for the existence of gravitational waves, according to the National Astronomy and Ionosphere Center.

The facility also discovered the first Earth-like planet in another solar system.

Virkki, the astronomer, will be involved in watching the Didymos asteroid in 2022, when NASA’s DART mission will try to hit the asteroid’s small moon with a spacecraft and see how that changes its course. 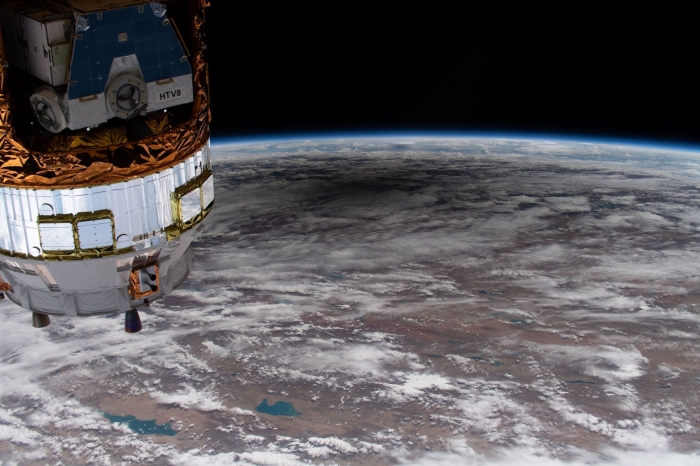 The International Space Station was orbiting over Kazakhstan and into China while the solar eclipse shadowing a portion of the Asian continent was captured by an external high definition camera on June 21. In the left foreground, is the H-II Transfer Vehicle-9 from Japan. Photo courtesy of NASA | License Photo