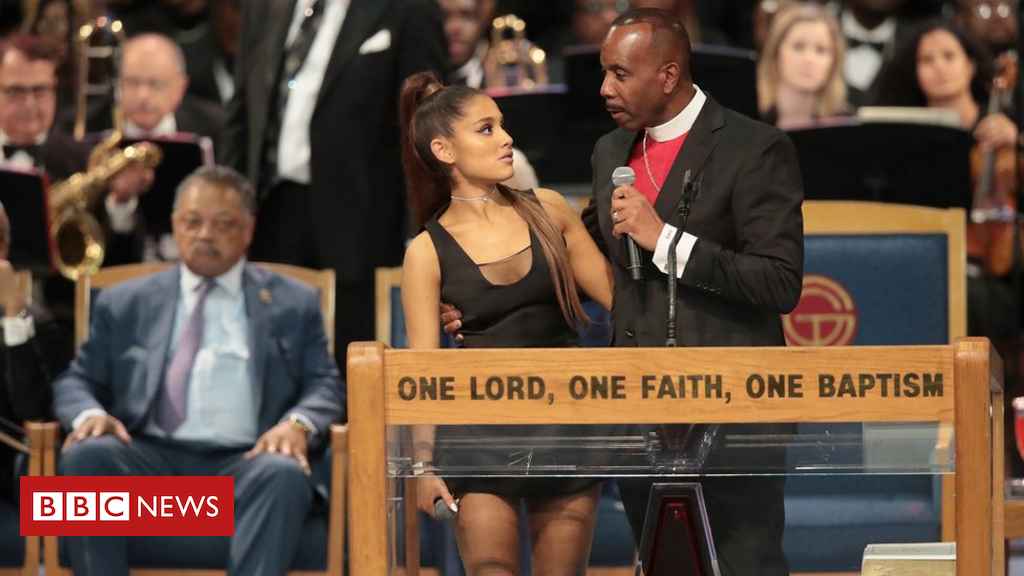 The bishop who led Aretha Franklin’s funeral has apologised to Ariana Grande after being accused of groping her on stage.

Images show Bishop Charles H Ellis III holding Ariana high above her waist, with his fingers squeezed around the side of the singer’s chest.

“It would never be my intention to touch any woman’s breast,” he told the Associated Press.

“Maybe I crossed the border, maybe I was too friendly or familiar.”

He added: “But again, I apologise.”

The preacher said he hugged all artists, male or female, during the ceremony commemorating the Queen of Soul.

But viewers began posting images from the service when Ariana got up to sing Aretha’s song (You Make Me Feel Like) A Natural Woman.

Many people felt that Bishop Ellis’s hand was inappropriately high on the 25-year-old’s body as he spoke to her – saying that she looked uncomfortable with the contact.

It came as others on social media had been criticising Ariana for what she was wearing to the church service, saying her dress was too short.

Some people said that the focus being on Ariana, rather than the bishop, was misogynistic.

Misogyny looks like criticizing Ariana Grande for how short her skirt was— but not the fact that Bishop Charles Ellis gave her a mammogram on national television. 🙄

And argued that the pastor’s embrace deserved greater attention than it was getting.

I think every woman can look at Ariana Grande's face and body language and viscerally feel what she's feeling. The tension. The nervous laughter. Not wanting to make a scene or make him angry. Every woman knows this feeling.

But google her and everyone's talking about her dress. https://t.co/VYikD43RnM

And people began reposting an old tweet of hers related to consent.

Women's choice. ♡ our bodies, our clothing, our music, our personalities….. sexy, flirty, fun.
it is not. an open. invitation.

“I hug all the female artists and the male artists,” Bishop Ellis told AP.

He added: “The last thing I want to do is to be a distraction to this day. This is all about Aretha Franklin.”

It wasn’t the only thing the bishop apologised to Ariana about though.

Earlier in the service he made a joke about the singer’s name.

“When I saw Ariana Grande on the program, I thought that was a new something at Taco Bell,” he said to her.

A lot of people found the joke funny, and it featured heavily in the conversation around the funeral.

But Bishop Ellis apologised after some thought it was distasteful.

So, that Taco Bell comment aimed at Ariana Grande was very inappropriate and unnecessary at Aretha Franklin's service. That was completely disrespectful. Chucky Ellis knows better.

“I personally and sincerely apologise to Ariana and to her fans and to the whole Hispanic community,” the bishop said.

“When you’re doing a program for nine hours you try to keep it lively, you try to insert some jokes here and there.”

Ariana was performing at the funeral of Aretha Franklin alongside icons like Stevie Wonder and Chaka Khan.

Aretha was remembered as an aunt, grandmother, friend, civil rights activist and icon of black womanhood, in a nine-hour ceremony.

She died earlier this month of pancreatic cancer, aged 76.

Newsbeat has contacted representatives of Ariana Grande for comment.