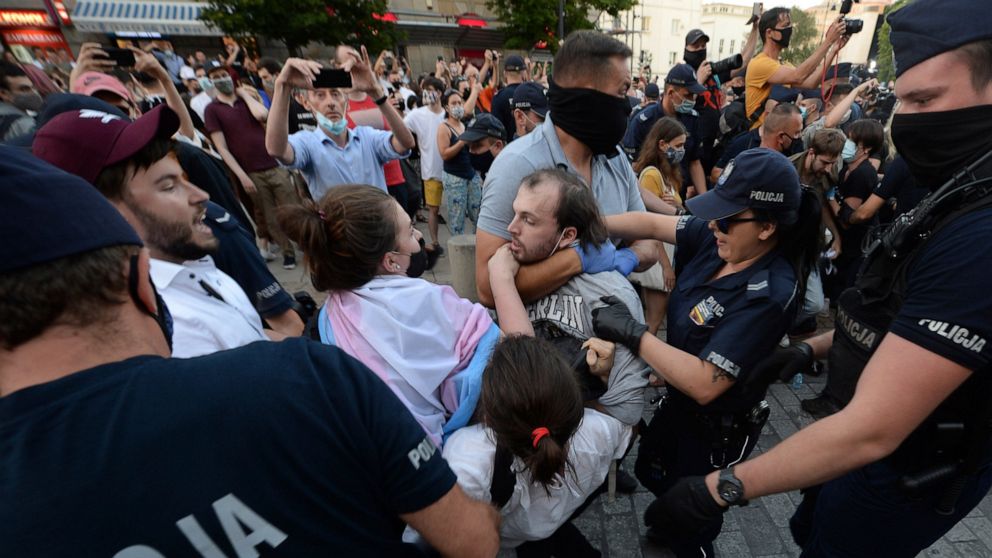 WARSAW, Poland — LGBT rights activists scuffled with police Friday in Warsaw after turning out on the streets to protest the arrest of an an activist.

According to Polish media reports, the activist was placed under two-months arrest Friday for protest actions against anti-homosexual attitudes. After the person was arrested in central Warsaw, protesters surrounded the police car and one person climbed on top of it.

Police said on Twitter that “during the detention of the activist, the crowd hindered the actions of the policemen. Interventions are being undertaken against the most aggressive people. Zero tolerance for breaking the law.”

LGBT rights activists said they are defending themselves against intensifying anti-homosexual actions and repression coming from the government and ultra-conservative groups.

The Warsaw-based group Campaign Against Homophobia alleged that the arrest Friday was politically motivated.

Michał Szczerba, a lawmaker with the opposition party Civic Platform, criticized police behavior and the government.

“The disproportionate and brutal nature of the police confirms that it has political approval,” he said.

The incident comes amid deepening tensions in Poland between those supporting greater tolerance and legal protections for gays, lesbians, bisexuals and transgender people and a conservative government that has been denouncing the LGBT rights movement as a threat.

President Andrzej Duda won re-election last month after a campaign that stressed his opposition to LGBT rights. He and members of the governing populist party, Law and Justice, have repeatedly called it an “ideology” that threatens Polish families and traditions.