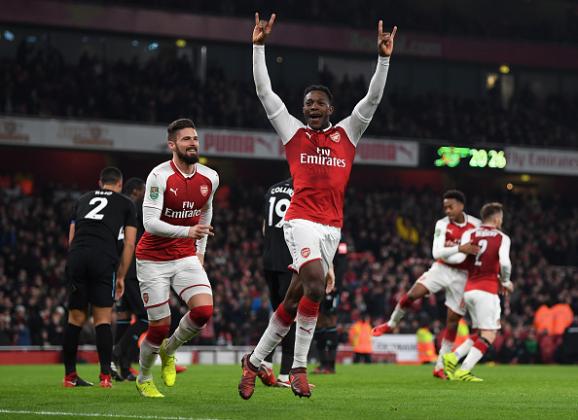 Danny Welbeck scored the only goal of a forgettable game as Arsenal booked a place in the Carabao Cup semi-finals at the expense of West Ham.

The pair had shared a goalless draw in their Premier League meeting at the London Stadium last week but this time out, with both sides fielding very different line-ups, it was Welbeck who made the difference to seal a 1-0 win.

The 27-year-old will not care how the goal came about as he got on the scoresheet for the first time since his double against Bournemouth on September 9.

It proved to be enough to book Arsene Wenger’s side their first League Cup semi-final place in six years as West Ham offered very little in the way of goal-threat.

As expected, Wenger made wholesale alterations as he introduced an entirely different starting XI to that which toiled to victory over Newcastle on Saturday.

The likes of Theo Walcott, Olivier Giroud, Francis Coquelin and Welbeck were again afforded the chance to stake a claim for a place in the Gunners’ Premier League line-up.

West Ham, too, made changes – with David Moyes bringing in six new faces as Joe Hart returned in goal and Manuel Lanzini missed out having been handed a two-match ban earlier on Tuesday having been adjudged to have dived in the weekend win at Stoke.

The first-half lurched along with the type of broken, inconsistent football expected with so many changes as neither goalkeeper was forced into meaningful action.

Walcott then wasted a superb chance, heading a Sead Kolasinac cross wide when picked out free in front of goal.

The deadlock was broken before the interval in a fashion befitting the opening 45 minutes as Welbeck bundled home from close-range after Mathieu Debuchy had headed Coquelin’s perfect pass across goal to find the England international.

However, there was bad news for the hosts when Giroud pulled up with what appeared to be a hamstring injury. Reiss Nelson replaced the France international for the closing stages.

The introduction of Carroll and Sakho offered the Hammers more of an attacking outlet but Moyes’ side were still unable to test Arsenal’s second-string defensive unit.

Kolasinac has sat out the last two Premier League games but returned at left-back for Arsenal here and was assured in possession of the ball.

He will be hoping for a return to Wenger’s A-team when Liverpool visit on Friday, while Welbeck is likely to have to settle for a place on the bench once again despite his winning goal as Alexandre Lacazette, Mesut Ozil and Alexis Sanchez come back in.