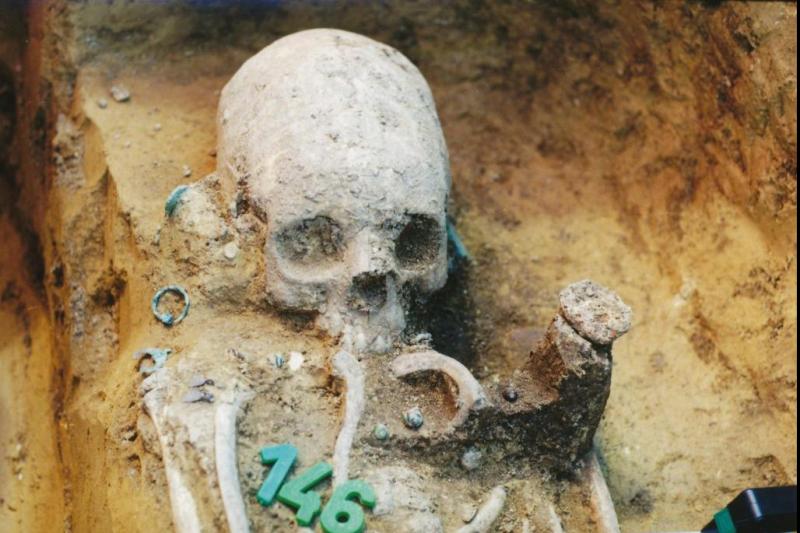 April 30 (UPI) — Archaeologists have recovered evidence of the formation of a multicultural community during Europe’s Migration Period.

During the first half of the 5th century, the Huns invaded Central Europe, triggering the collapse of the Roman Empire. As the Romans retreated from the Pannonia provinces of western Hungary, migrants from elsewhere — many seeking refuge from the hordes of Huns — moved in.

To better understand this transitional period, researchers used a combination of archaeological, anthropological and isotopic analysis techniques to survey the artifacts and human remains — including a group of deformed skulls — recovered from the 5th century Mözs-Icsei dülő cemetery, located near the town of Szekszárd.

“Archaeological analysis of grave forms and grave goods is always the basis of such investigations because it informs on chronological placements of sites as well as cultural associations and backgrounds,” Corina Knipper, researcher at the Curt-Engelhorn-Center for Archaeometry in Germany, told UPI in an email. “Isotope analyses produce data on the individuals level. They reveal whether a person was locally born or non-local to a site and inform about dietary habits.”

In total, researchers surveyed 96 burials. The analysis, detailed this week in the journal PLOS One, revealed the presence of three distinct groups across two or three generations. The settlement’s founding group was distinguished by Roman burial traditions, while a second group of migrants was characterized by skull deformation.

“Grave forms were the most important archaeological characteristics of the different cultural groups,” Knipper said. “Brick structure graves were typical for the Roman population. Ledge graves or niche graves are unknown from Roman cemeteries, and point to a different, non-local cultural background. Parts of the grave goods, especially elements of jewelry were also informative regarding cultural associations.”

More than just cohabitation, researchers found evidence of cultural exchange and hybridization. The third group of later burials was characterized by a mix of Roman and various foreign traditions.

Isotopic analysis confirmed that the area’s multicultural characteristics were fueled by the arrival of migrants. The members of the second group, who arrived around a decade after the founders, all came from the same place and shared similar dietary habits.

Though the Migration Period was marked by instability, the latest research suggests peace persisted in the Pannonian settlement of Mözs.

“Interestingly, the burials did not contain any weapons, as they are rather common among inhumations about a century later,” Knipper said. “The anthropological excavation also did not identify any indications for injuries that were likely caused by interpersonal violence. The placement of burials with different cultural backgrounds in the same burial groups may also be taken as an indication for a rather peaceful integration of representatives of different groups.”

Scientists have previously found evidence that non-local individuals successfully integrated into local communities in Germany during the 5th and 6th centuries. Researchers hope to use the investigative strategies deployed at Mözs to better understand the dynamics of the Migration Period in other parts of Europe.

“The investigation of the cemetery of Mözs is part of a larger project that includes archaeological, anthropological and isotope analyses of several hundred burials from cemeteries of the fifth to the seventh centuries,” Knipper said. “We are investigating whether group mobility and dietary habits as we identified them at Mözs also occurred in other places and over time.”