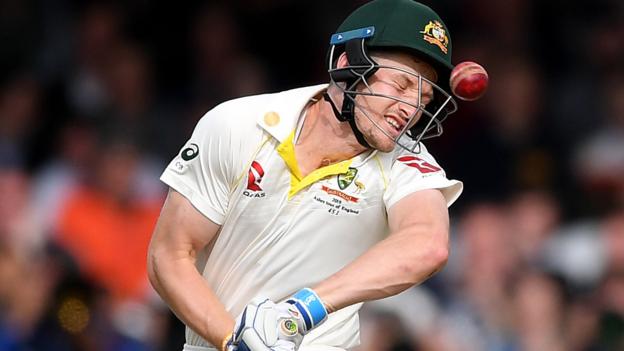 England had to settle for a draw in the second Ashes Test, but not before Australia were given a huge fright by a Ben Stokes century and another electric Jofra Archer spell on a gripping final day at Lord’s.

With the light fading and the tension rising, Archer tore in and spinner Jack Leach had the ball spitting from the rough, but Travis Head and Pat Cummins saw the tourists to 154-6.

Stokes’ unbeaten 115 allowed England to declare on 258-5, setting Australia an unlikely 267 to win.

The visitors were without premier batsman Steve Smith, who was withdrawn from the match with a concussion sustained when he was hit by Archer on Saturday.

Then, with the second ball he bowled to Marnus Labuschagne – the concussion substitute who replaced Smith – Archer dealt another vicious blow to the grille of the batsman’s helmet with a delivery clocked at 91.6mph.

Labuschagne bravely battled to 59, but when he was contentiously caught by Joe Root off Leach, it began an Australia slide that also included an outrageous, acrobatic grab by Joe Denly to remove Tim Paine.

However, the light became so poor that Archer was prevented from bowling the final two overs from the Pavilion End and Australia kept their 1-0 lead intact.

They will retain the Ashes if they win the third Test at Headingley, which begins on Thursday.

If their heavy defeat in the first Test at Edgbaston left England with all the problems – Smith’s two centuries, James Anderson injured, Moeen Ali dropped – then it is the home side who will go to Headingley with the momentum.

Indeed, if it had not been for the rain that wiped out 10 overs at the beginning of the fifth day as well as five previous sessions, the series would probably be level.

On Sunday, five weeks after the World Cup final, England’s heroes on that day – Stokes and Archer – once again delighted a partisan Lord’s crowd that was almost treated to a finale as a dramatic as that win over New Zealand.

It is Archer who has changed the complexion of this series, not only by inflicting the injury on Smith that leaves him a doubt for Headingley, but by possessing the sheer pace that will surely continue to trouble the Australians.

England have made other gains, too. Jonny Bairstow and Jos Buttler have found some form with the bat and Leach looks a reliable spin option for captain Root.

The top order is however still a concern and the team as a whole are inconsistent. One poor England performance or an inspired Australia display in one of the final three Tests will see the Ashes heading back down under.

If there was still any doubt after his World Cup exploits, this debut – perhaps the most exciting by an England player since Kevin Pietersen on the same ground against the same opponents 14 years ago – proved Archer can be a potent weapon for years to come.

He backed up Saturday’s venomous spell to Smith with a new-ball burst on Sunday, reducing Australia to 19-2 then flooring Labuschagne with a terrifying bouncer.

But Labuschagne, in his sixth Test, instantly got up and, after some treatment, carefully weathered the storm with well-judged leaves and handsome drives.

After Cameron Bancroft was lbw to Leach in the first over after tea, Travis Head joined Labuschagne for a fourth-wicket stand of 85 during which Head was crucially dropped by Jason Roy at second slip off Stokes with 20 overs remaining.

With Head reprieved, Australia seemed safe when the sweeping Labuschagne was adjudged to have been held by a diving Root, via a deflection off short leg, just before the ball hit the turf. It was actually the beginning of more drama.

Matthew Wade popped Leach to short leg and yet another ferocious Archer spell was rewarded when square leg Denly magnificently leapt high to his left to hold a hooking Paine in one hand.

England sensed victory and crowded the bat, but missed one more half-chance when silly point Rory Burns could not cling on to Cummins’ defensive push, and the forced withdrawal of Archer sucked the life from the conclusion.

At 96-4, leading by 104, it was England who were most vulnerable at the beginning of the day.

That they were put into a position from which they could win was down to the patience then power of Stokes, who scored his first Test century in more than two years and his first since the incident outside a Bristol nightclub that denied him a place on the last Ashes tour.

Stokes, who had two lives when on six the previous evening, absorbed Australia’s early-morning pressure alongside Buttler, pushing their fifth-wicket stand to 90.

Losing Buttler soon after lunch, Stokes was joined by Bairstow and switched from straight-batted defence to flamboyant strokeplay.

As England rattled along at almost six an over, Stokes swept off-spinner Nathan Lyon for successive sixes, while Bairstow hit two sixes of his own.

With the crowd carried along by the momentum, Stokes turned Lyon for a single to reach three figures and celebrated with a double punch of the air. When a Peter Siddle over was taken for 16, England declared.

‘We’re in for a crackerjack series’ – reaction

Player of the match Ben Stokes: “It is nice to get a hundred. It is almost a little more sour when you can’t get the win.

“It was an amazing game to be part of. We nearly got there. We fought incredibly hard to get the win. Fair play to Australia for holding out.

“That’s why it [Test cricket] is the best form to play. You go through ups and downs emotionally. It is pinnacle of any cricketer’s ambitions.”

England captain Joe Root: “We had to get to a score that we felt we were in control. We managed to do that. Ben played exceptionally well and then we threw everything we could at them. Fair play to Australia.”

Australia captain Tim Paine: “We were probably a fair way off our best in this Test match. Part of becoming a good team is finding a way to come through the last half-hour like today.

“We go to Leeds next week – we’ve had a look at it. It’s something we can get better at. It’s not all doom and gloom.”

Former England captain Michael Vaughan on BBC Test Match Special: “Australia look like they have got more problems with the batting unit.

“Joe will be happy with the way his team have produced some real quality. If they play to the last two days’ standard they will have too much for Australia at Headingley. We’re in for a crackerjack series.”

BBC cricket correspondent Jonathan Agnew: “It is a winning draw as far as England are concerned. Australia were fighting for their lives. A very interesting series ahead.”