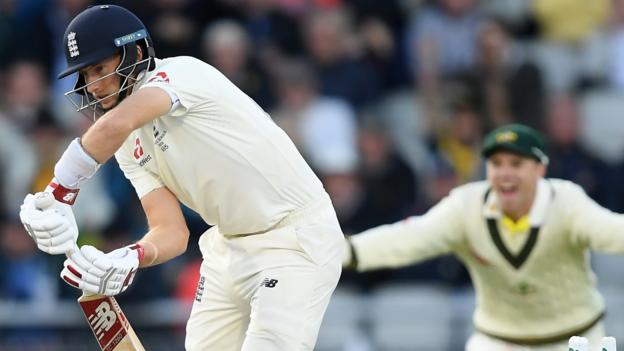 Captain Joe Root says England must build towards winning the Ashes in Australia in 2021-22 after failing to regain the urn this summer.

England are 2-1 down and cannot take the Ashes back from the holders even if they win the fifth Test at The Oval, which begins on Thursday.

“We have to use the next two-and-a-half years to focus on putting in a winning tour down under,” said Root.

“That’s a real incentive for everyone, to be part of something special there.”

England were beaten in the fourth Test at Old Trafford, meaning Australia have an unassailable lead and will leave the UK with the urn for the first time since 2001.

It also ended England’s hopes of adding the Ashes to the World Cup they won earlier this summer.

It can be argued that England’s Test cricket has suffered in recent years because of the emphasis they put on being crowned 50-over world champions for the first time.

But Root, whose position as skipper has come under scrutiny since the loss at Old Trafford, says he is clear on how he wants to take his team forward.

“I know the direction I want to take this team and it’s about starting that now, not after this series,” said the Yorkshire batsman.

“It’s about trying to make sure we use this match as a stepping stone, win this game, have a really strong winter and move forward as a group.”

Root, 28, also addressed questions on whether being captain affects batting. He averages 40.87 as skipper, as opposed to 52.80 when not leading.

“I’ve not performed how I would have liked,” he said. “I’ll continue to keep working hard and trying to improve my game.”

He also believes that the World Cup-winning summer should be viewed as a success, even if the Ashes have not been regained.

“To win the World Cup for the first time is a huge achievement,” said Root.

“Sometimes you get outplayed and we’ve had some challenges across the summer. There have been quite a few injuries and the weather has intervened in certain parts of games. The series could have looked different.”

England have been forced to rejig the balance of their side because of a shoulder injury to all-rounder Ben Stokes.

It means yet another batting order reshuffle for the home side, with Stokes moving up to number four, Jonny Bairstow and Jos Buttler shuffling up one place behind him and Curran slotting in at seven.

Australia have recalled all-rounder Mitchell Marsh for batsman Travis Head in order to ease the burden on their pace attack, which could be unchanged from Old Trafford. Fast bowler Peter Siddle is on stand-by in case they do opt for an alteration.

While the Ashes have been retained, captain Tim Paine said the ambition is to win the series and, for that reason, the last Test is a like a “grand final” for the tourists.

“We’re very hungry,” he said. “We have spoken a lot about it. We came here to win the Ashes, not just retain them.

“Last week’s result at Old Trafford was brilliant and we played very well, but all the guys are aware that this Test is bigger than that one. We want this Test as much as any other Test we’ve played in this series.”