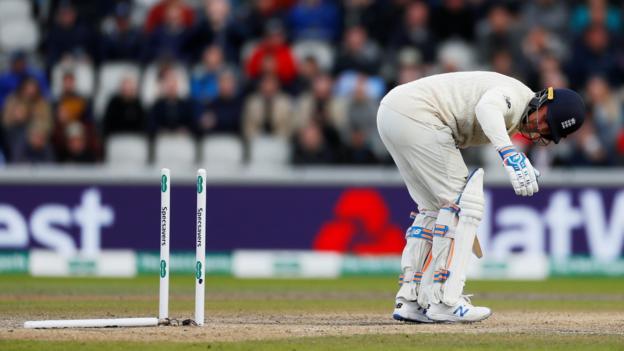 England face a huge battle to save the Ashes after Australia took three late wickets on the third day of the fourth Test at Old Trafford.

When Burns and Root were adding 141 for the third wicket, England were making steady progress.

But Hazlewood backed up a superb spell from Pat Cummins to have Burns fencing to second slip for 81, then trapped Root lbw for 71.

When Roy’s middle stump was removed, England had lost three wickets for 30 runs.

Ben Stokes and Jonny Bairstow were together when bad light ended play about 45 minutes early, with England probably needing to bat for much of Saturday and probably Sunday in order to avoid defeat.

If they fail, Ashes holders Australia will be 2-1 up with one Test to play and assured of retaining the urn.

England are unlikely to have the benefit of the rain that delayed play until 13:30 BST on Friday – the weather forecast is clear for the weekend.

Faced with such a huge Australia total, England arrived knowing that any sort of batting slump in their first or second innings would send the urn back down under.

For so long, Burns and Root were defiant in the face of some hostile bowling from Hazlewood and Cummins in particular. Burns was peppered by the short ball, while Root came through an early examination from off-spinner Nathan Lyon.

They were given more vocal support from an Old Trafford crowd still having to shiver through the cold – every run was celebrated, while Lyon came in for regular taunting after his fumble at the end of England’s thrilling third-Test win at Headingley.

Australia had to battle the conditions that faced England’s bowlers for much of the first two days – not only the wind, but also the placid pitch.

That they tested the batsmen with such regularity is to their credit, and the tourists deserved Hazlewood’s late success.

It moved them a step closer to retaining the Ashes, but England could yet take the contest to The Oval if the rest can replicate the battling qualities of Burns and Root.

There were just a few signs of frustration creeping in for the tourists when it looked like their efforts would be wasted.

During an electric 10-over spell from Cummins either side of tea, Root edged between keeper Tim Paine and first slip David Warner on 54 and, in the next over, Australia wasted a review on a wishful lbw appeal against the same man.

Whereas Cummins was luckless, his replacement Hazlewood was incisive.

First he got one to go across Burns that the left-hander followed and edged to Steve Smith at second slip, then got one to scuttle that the pinned Root did not bother to review.

Roy had already moved down the order after opening in the first three Tests and was in no position to play one that nipped back, pushing hard with his hands and on the walk with his feet. It left Hazlewood with 4-48, having removed nightwatchman Craig Overton in the second over of the day.

Such was Australia’s momentum, it seems likely they would have done more damage had the light not closed in.

From 23-1 overnight and with Overton adding only two to his overnight three, England were under pressure when Root joined Burns.

Burns bravely repelled the pace bowler, Root engaged in a battle of wits with Lyon and also had his box broken by a blow from Mitchell Starc.

As they warmed to the task, runs were accumulated, particularly when Starc was wayward and Lyon dropped short.

Burns and Root scored square of the wicket on both sides. Root followed up his half-century in the second innings at Headingley, while Burns has almost 100 runs more than all of the other openers in the series combined.

Even though Burns’ dismissal sparked the late slump, England have been moved to a position from where they should get the 98 more runs they need to avoid the follow-on.

However, by the end of the day, there were some signs of the ball beginning to keep low, adding a further complication to their task of batting to save the game.

England in a ‘decent position’ – what they said

England opener Rory Burns on BBC Test Match Special: “It’s not ideal, losing those wickets, but the way we scrapped throughout the day, we’re in a decent position.

“Test cricket is Test cricket and it was challenging at times. I found a way to get through today and that’s probably the method of my batting.

“It’s about partnerships, now. We’re in a fight and it’s very obvious what we need to do come tomorrow.”

Former England captain Michael Vaughan: “This is Australia’s game to lose. England have to bat beyond lunch, bat into the afternoon session and if they can get to 350, they’re taking overs out of the game that they’ll have to bat on Sunday. It will be the great escape.”

“That Pat Cummins spell was probably the best of the series and the fact is, Rory Burns survived that spell. That should give him a huge amount of confidence. Every single person that adores Test cricket would admire what Cummins produced for his team today.”

Australia bowler Pat Cummins: “The ball started to zip around and I felt in the game. It was not to be for me. It makes me happy when Josh comes on and takes wickets at the other end straight away. He did say, ‘I owe you one for that’.

“We are pretty happy being 300 ahead. It was a tough day of Test cricket. To get those three wickets late, we feel really in the game.”