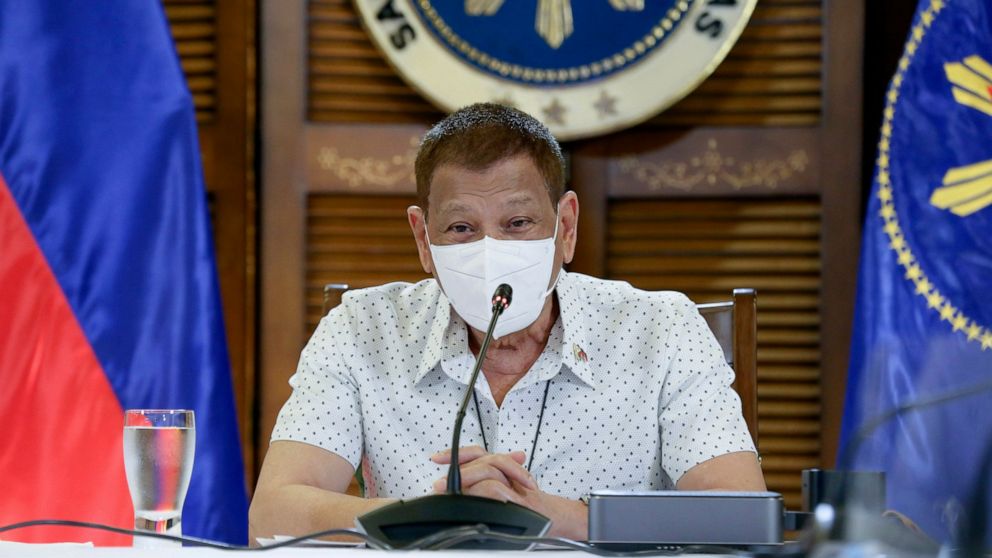 MANILA, Philippines — President Rodrigo Duterte says he has extended a state of calamity in the entire Philippines by a year to allow the government to draw emergency funds faster to fight the COVID-19 pandemic and harness the police and military to maintain law and order.

Duterte first placed the country under a state of calamity in March when the number of confirmed infections was approaching 200 with about a dozen deaths. The country now has more than 290,000 confirmed cases, the highest in Southeast Asia, with nearly 5,000 deaths.

The tough-talking president lashed anew at critics in his televised remarks late Monday for accusing his administration of not doing enough to contain the outbreaks.

“What ‘enough’ do you want? There are hospitals, beds and funeral parlors. Everything is there,” Duterte said, specifying Vice President Leni Robredo, who leads the opposition, in his tirade.

“You know Leni, if you want, if you really want to do away with COVID, let’s spray the Philippines or Manila over with pesticide to kill all … The only thing that we can do, really, is to wear a mask, wear a face mask, and that’s it and wait for the vaccine,” Duterte said in his southern hometown in Davao city.

The state of calamity in place until September 2021 will be used mainly to draw emergency funds quickly anywhere in the country. Officials can also control the prices of basic commodities like rice and cooking oil under such a state of calamity.

Quarantine restrictions such as social distancing remain as they are now.

Duterte also said a ban on the deployment of Filipino nurses, doctors and other health workers with finalized work contracts abroad has been lifted. Those without signed contracts remain prohibited from leaving the country to ensure an adequate supply of medical workers amid the continuing outbreaks.

The Philippines is a leading source of global labor, including medical personnel.

In other developments in the Asia-Pacific region:

— India registered more than 75,000 new coronavirus cases in the past 24 hours. The Health Ministry on Tuesday also reported 1,053 deaths, taking total fatalities to 88,935. Daily new infections have hovered around 90,000 for days, but testing varies widely and new surges are occurring in states that previously were relatively unscathed. The sharpest recent increase has been in the central state of Chhattisgarh, where nearly half the population are poor and the health system is very fragile. Cases have increased from around 33,000 at the beginning of the month to over 86,000 now. A one-week lockdown of 10 districts in the state was announced Monday. Infections also were increasing sharply in the Himalayan states of Himachal Pradesh and Uttarakhand, along with agrarian Punjab state.

— South Korea has added 61 additional coronavirus cases, its lowest daily virus tally since mid-August amid a downward trend in fresh infections. The Korea Disease Control and Prevention Agency said Tuesday the additional figures took the country’s total to 23,106 with 388 deaths. It’s the third day in a row that South Korea’s daily virus tally has stayed below 100. South Korea had seen an uptick in new infections, mostly in the greater Seoul area, since early last month, before its caseload recently began slowing under stringent physical distancing rules.