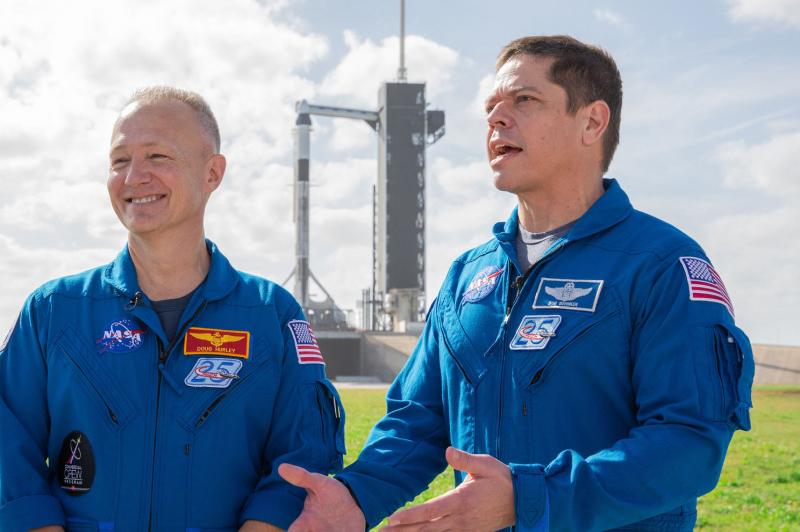 May 1 (UPI) — The two astronauts who are to begin a new era of human spaceflight from U.S. soil this month said Friday they hope to inspire generations of Americans.

It is time again “to be watching American rockets launching from the Florida coast to the International Space Station,” said Doug Hurley, who will be launched May 27 on the first crewed mission from this country since he piloted the final space shuttle mission in 2011.

Hurley and Bob Behnken also will be the first astronauts to lift off on a privately owned space vehicle — a Falcon 9 rocket that carries a Crew Dragon capsule, both built by Elon Musk‘s SpaceX.

The astronauts said they were pleased to learn only recently they would spend a longer time than previously planned on the International Space Station. NASA announced Friday that their mission, originally designed for a few days in space as a demonstration, would last for weeks or months.

Behnken noted he would be flying on the first new crewed spacecraft for NASA since the first shuttle was launched in 1981.

“It’s probably a dream of every test pilot school student to have the opportunity to fly on a brand-new spaceship, and I’m lucky enough to get that opportunity,” he said.

The mission also comes under restrictions due to the COVID-19 pandemic. The astronauts and NASA Administrator Jim Bridenstine urged Americans to stay home for the launch and not come to the Kennedy Space Center area.

“We want everyone to enjoy this as a moment in U.S. space history, but we want them to enjoy it from a distance,” Behnken said.

When the two astronauts arrive, they will help the existing three-member crew on the space station change batteries and handle spacewalks. That crew has one U.S. astronaut, Chris Cassidy, and two cosmonauts.

“There’s a lot of work and activity that can be done in the U.S. segment — certainly more than one person can accomplish on their own,” Behnken said. “I wouldn’t be, you know, probably a real astronaut if I didn’t say I was looking forward to the possibility of doing some spacewalks. That’ll be some icing on the cake for us.”

The mission is part of the final certification process before Crew Dragon provides ongoing shuttle service to the space station. The two astronauts will be the first since the last Apollo landing in 1972 to come back to Earth with a splashdown just off Florida’s Atlantic Coast.

“We do expect [splashdown] to be a little bit softer than a Soyuz landing, but definitely harder than a space shuttle landing and then … well, we’ll tell you about it in the post-landing press conference,” Behnken said.