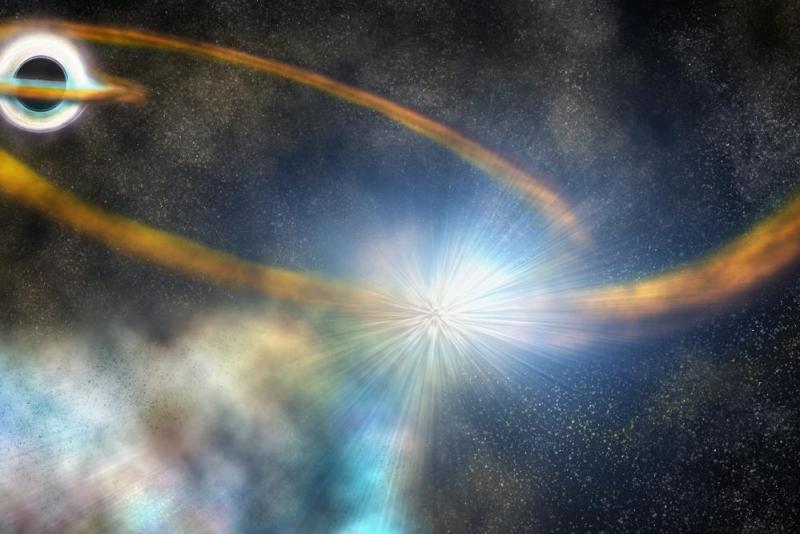 Sept. 26 (UPI) — NASA’s Transiting Exoplanet Survey Satellite has spotted the remnants of a star that was recently shredded by a supermassive black hole — a first.

Astrophysicists and cosmologists estimate supermassive black holes are located at the center of most galaxies. When stars wander too close, a black hole’s tremendous gravitational pull can rip it apart. The violent interaction is known as a tidal disruption event, or TDE.

Scientists can come to better understand the dynamics of black holes by studying the spectral signatures of TDEs.

The tidal disruption event ASASSN-19bt was first spotted by an international network of telescopes called the All-Sky Automated Survey for Supernovae. TESS was able to observe the TDE, as well, providing complementary images of the event.

When a star is ripped apart by a supermassive black hole, it peaks in brightness before tapering off. The NASA space telescope utilizes a wide field-of-view and continuous viewing, allowing it to capture the sudden spike in brightness in fine detail.

The newest images of ASASSN-19bt revealed the evolution of the shredded star in unprecedented detail.

“Only a handful of TDEs have been discovered before they reached peak brightness and this one was found just a few days after it started to brighten; plus, thanks to it being in what’s called TESS’ ‘Continuous Viewing Zone,’ we have observations of it every 30 minutes going back months — more than ever before possible for one of these events,” Thomas Holoien, astronomer at the Carnegie Institution for Science, said in a news release. “This makes ASASSN-19bt the new poster child for TDE research.”

Scientists were able to get a comprehensive picture of the tidal disruption event by coupling ground-based and space-based observations.

“I was actually observing at Carnegie’s Las Campanas Observatory on the night of the discovery,” Holoien added. “So, I was able to take spectra with our du Pont and Magellan telescopes less than a day after the event was first seen in South Africa by part of ASAS-SN’s network.”

By analyzing the spectral patterns — the changes in different frequencies of light produced by the event — scientists can identify the chemical composition and speed of materials being shredded by the black hole.

The latest findings, published this week in the Astrophysical Journal, suggest TDEs are more variable than astronomers previously thought.

Scientists found ASASSN-19bt in a galaxy that is younger and more dust-filled than the types of galaxies that typically host TDEs. The spectral patterns also revealed a brief period of cooling and fading prior to the buildup to the shredded star’s peak brightness. Despite the blip, the data showed ASASSN-19bt approached peak brightness surprisingly smoothly.

“Having so much data about ASASSN-19bt will allow us to improve our understanding of the physics at work when a star is unlucky enough to meet a black hole,” said Carnegie’s Decker French.