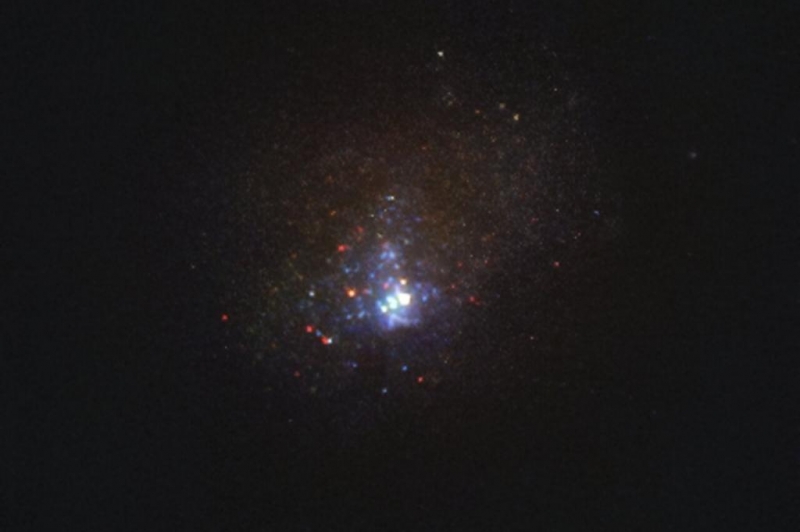 June 30 (UPI) — An unstable massive star in the Kinman Dwarf galaxy, located 75 million light-years away, has disappeared, but scientists aren’t sure why or how.

The Kinman Dwarf galaxy, located in the Aquarius constellation, is too far away for astronomers to observe individual stars, but between 2001 and 2011, scientists detected the signatures of a massive, unstable star in the latter stages of its evolution.

In 2019, when astronomers at the European Southern Observatory’s Very Large Telescope and its ESPRESSO instrument focused on the faraway galaxy, there was no sign of a massive star.

Early observations of the star suggest it was a “luminous blue variable” star, measuring some 2.5 million times brighter than the sun at it brightest.

Luminous blue variable stars are known to fluctuate dramatically in their luminosity, but even when they dim, the stars produce spectrographic signatures that can be identified by astronomers. No such signatures were found in the 2019 VLT observations.

“It would be highly unusual for such a massive star to disappear without producing a bright supernova explosion,” lead researcher Andrew Allan, a doctoral student Trinity College Dublin in Ireland, said in a news release.

“We may have detected one of the most massive stars of the local Universe going gently into the night,” said Jose Groh, an astronomer at Trinity College Dublin. “Our discovery would not have been made without using the powerful ESO 8-metre telescopes, their unique instrumentation, and the prompt access to those capabilities following the recent agreement of Ireland to join ESO.”

To determine the likely fate of the massive star, scientists returned to data collected by the Very Large Telescope’s UVES instrument between 2002 and 2009.

“The comparison of the 2002 high-resolution UVES spectra with our observations obtained in 2019 with ESO’s newest high-resolution spectrograph ESPRESSO was especially revealing, from both an astronomical and an instrumentation point of view,” said Andrea Mehner, staff astronomer at ESO.

It’s possible the star became a much less luminous version of itself after a period of outbursts — dim enough to be easily obscured by dust.

“Alternatively, the LBV could have collapsed to a massive black hole without the production of a bright supernova,” researchers wrote in the Monthly Notices of the Royal Astronomical Society.

To solve the cosmic mystery, scientists may have to wait until the next generation of powerful new telescopes come online — like the ESO’s Extremely Large Telescope, due to be unveiled in 2025. The ELT will be capable to imaging individual stars in distant galaxies like the Kinman Dwarf.