The decision to part ways with Quinn and Dimitroff came hours after the Falcons’ loss to the Carolina Panthers at Mercedes-Benz Stadium. Atlanta dropped to 0-5 for the first time since 1997 following the defeat.

Falcons team president Rich McKay will assume day-to-day oversight of football operations in an interim role, according to the team. An interim head coach is expected to be announced Monday.

Ulbrich was set to assume head-coaching duties if Quinn contracted the coronavirus during the pandemic.

“Decisions like these are very difficult, but the previous two seasons and start to this one have been especially hard for me because of the deep love, admiration and respect I and my family have for Dan, Thomas and their families,” Falcons owner Arthur Blank said in a statement Sunday night.

“For many years, they have represented me, our team, organization and Atlanta with class, commitment and all the passion you would want in the leaders of the team. But as everyone knows, this is a results business and I owe it to our fans to put the best product we can on the field.

“We have poured every resource possible into winning and will continue to do so, but the results of late do not meet our standard or what I’ve promised our fans. Therefore, we will install new coaching and personnel leadership of the Atlanta Falcons at the appropriate time.”

Quinn, 50, was in his sixth season in Atlanta and finishes with a 43-42 record. He led the team to back-to-back 7-9 seasons entering this year after guiding the franchise to the Super Bowl during the 2016 campaign.

Quinn’s playoff record was 3-2, which included a 34-28 overtime loss to the New England Patriots in Super Bowl LI after blowing a 28-3 lead in the third quarter. He went 24-29 in the three seasons since the title game appearance.

Dimitroff joined the Falcons in 2008 and played a critical role in building the franchise into a playoff contender. Since his arrival in Atlanta, the Falcons have won 109 games, reached the playoffs six times and won the NFC championship in 2016.

Dimitroff’s drafts have landed Matt Ryan, Julio Jones, Calvin Ridley, Grady Jarrett, Deion Jones, Jake Matthews and many others who have helped the Falcons become one of the winningest organizations in the NFL over the past decade. Since 2008, the Falcons are eighth in the league and fourth in the NFC in wins.

Quinn and Dimitroff were given three-year extensions in July 2018. Quinn had a 29-19 record at the time of the extension. 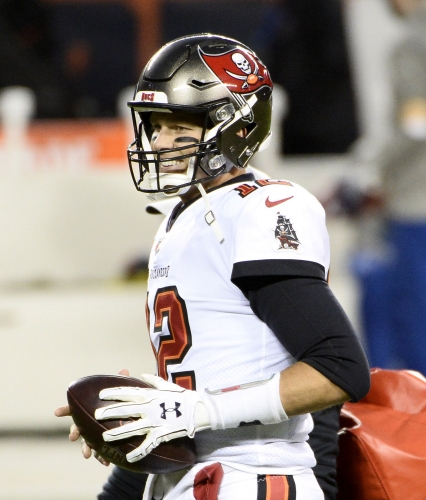 Tampa Bay Buccaneers’ Tom Brady warms up before the game against the Chicago Bears in Chicago on Thursday, where the Bears won 20-19. Photo by Brian Kersey/UPI | License Photo