If you’re in the market for a new car, there’s a good chance you’ll find some decent deals during the long Labor Day weekend sales push.

With vehicles sitting on lots longer and dealerships eager to make room for next year’s models, automakers have boosted their discounts ahead of the three-day weekend. The average incentive is $ 4,177 for August, compared with an estimated $ 4,074 in July and $ 3,878 a year ago, according to the latest data from J.D. Power and LMC Automotive.

“Consumers should see some pretty good deals,” said Kelsey Mays, senior editor at Cars.com. “This is one of the marquee weekends, especially when it wraps in August sales like it will this time.”

In fact, if you’re prepared to purchase and have flexibility over the weekend, Saturday — the last day of August — would be the day most likely to yield the best deal as dealerships aim to hit their end-of-month sales goals, said Matt Jones, senior consumer advice editor at Edmunds.com.

Despite signs of economic slowing, auto sales remain relatively strong. Although down about 1.7% from last year, an estimated 17 million vehicles will be sold in 2019, according to the J.D. Power/LMC forecast.

And while the ongoing trade war with China has meant increased tariffs on materials and other parts used by U.S. auto manufacturers, it remains uncertain whether car prices eventually will bear the brunt of any additional costs or if automakers can find other ways to absorb or offset them in the short-term.

“The auto industry is reliant on Chinese parts,” said Jill Gonzalez, an analyst at personal finance website WalletHub.com. “Even for the cars manufactured in the U.S., they’re relying on parts made overseas, so the industry is paying more from tariffs already in place — and they’ll pay more if other tariffs go into effect.”

Already, the average amount that consumers pay for new cars has continued to climb due partly to shifting consumer preference to pricier SUVs and pickup trucks and away from lower-cost sedans and smaller cars. Improved technology and safety features add to the price, as well. In the first 25 days of August, SUVs and pickup trucks accounted for 71.5% of all retail sales. 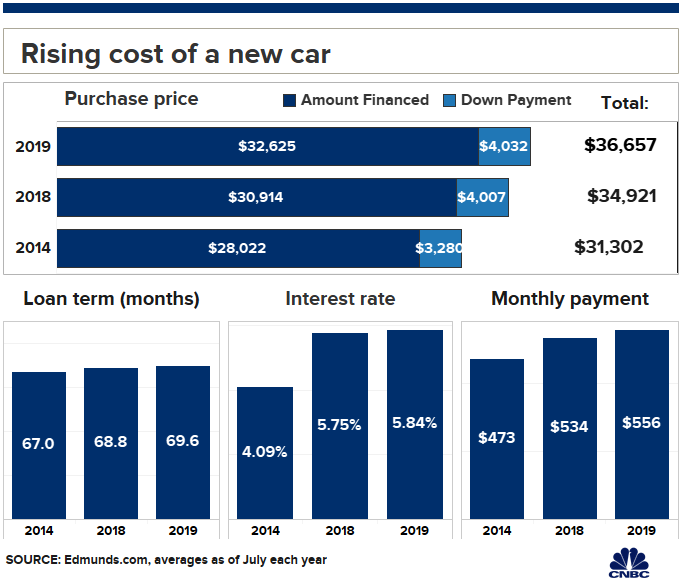 And, consumers are stretching out the length of auto loans to afford new-car purchases: As of July, the average loan length was closing in on 70 months — two months shy of six years.

If you’re browsing deals, be aware that some of them might expire right after the weekend, Mays said.

However, a manufacturer’s discount should not be the end of the conversation with a dealership — negotiations should be based on the reduced price, Mays said.

More from Personal Finance:
Here’s how the wage gap affects black women
The 30% rule of thumb for credit card use could cost you
Despite tax overhaul, marriage penalty still hits many couples

“That discount only comes out of the manufacturer’s margin, not the dealership’s,” Mays said. “Use that discounted price for a starting point.”

On top of manufacturer discounts, an individual dealer might give you a better deal on a trade-in, or a lower interest rate, or even extras such as free oil changes.

“We always tell folks to focus on the ‘out-the-door’ price of the vehicle,” Mays said.

That amount includes taxes and fees, and offers more information about the total cost than price alone would, Mays said.

“Ask the dealer for that amount and negotiate that number,” he said.

The share of consumers who were able to get a rate below 4% rose slightly to 35% in July from 31% in June. The average rate for last month was 5.8%, down slightly from 6%.

Separate research from WalletHub shows that the best rates are snagged through manufacturer financing (34% below average), followed by credit unions (12% below average).

Experts recommend getting preapproved financing before heading to the dealership. If you’re offered better terms from the dealer, great. If not, you have the best deal you could find.

“A lot of times we’re so focused on shopping for the car — the make, the model, the color — that we forget we can shop around for a loan as well,” Gonzalez said.

Make sure you’re armed with all the documents you’ll need to complete a sale: your driver’s license, the title and registration for your existing car (if you’re trading it in), and proof of insurance.

If you are making a down payment, call the dealership ahead of time to find out what forms of payment are accepted.

Once you get to the nitty-gritty of a deal, you might be offered an optional feature or service contract, such as an extended warranty.

Make sure you do the math before you sign on the dotted line — not only to understand the extra monthly cost, but also to know what you would pay over the life of the loan for the add-on.