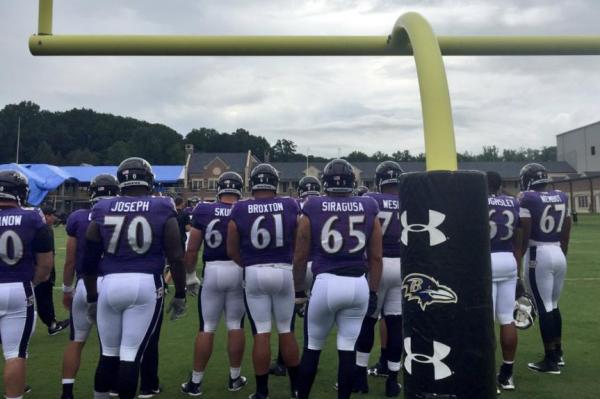 Aug. 1 (UPI) — Rookie guard Nico Siragusa was carted off of the field at Baltimore Ravens practice after injuring his knee.

Sources told NFL Network that the results showed that he tore his ACL, MCL and PCL during Tuesday’s session. Siragusa, 23, was a fourth round pick in the 2017 NFL Draft out of San Diego State. He was working with the Ravens’ first team at the time of the injury.

“I’ll be back,” Siragusa tweeted after the news broke of the injury. “Comeback season in the works.”

Siragusa is listed at 6-foot-4, 319 pounds. He had 42 career starts and played in 54 consecutive games for the Aztecs.

Ravens wide receiver Quincy Adeboyejo was also carted off during the practice. Wide receiver Breshad Perriman also left the practice after tweaking his hamstring, according to the Ravens’ website. The Ravens also lost tight end Crockett Gillmore for the season after he suffered an MCL injury. Alex Lewis and Marshal Yanda are expected to fill in at guard for the Ravens.

“We have a lot of good players,” Ravens coach John Harbaugh told reporters, according to the team website. “We’re going to play football games. We’re the Ravens and we’re going to be a really good team. That’s how we do it.

The Ravens have practice Wednesday through Saturday in Owings Mills, Md. before having an off day on Sunday.