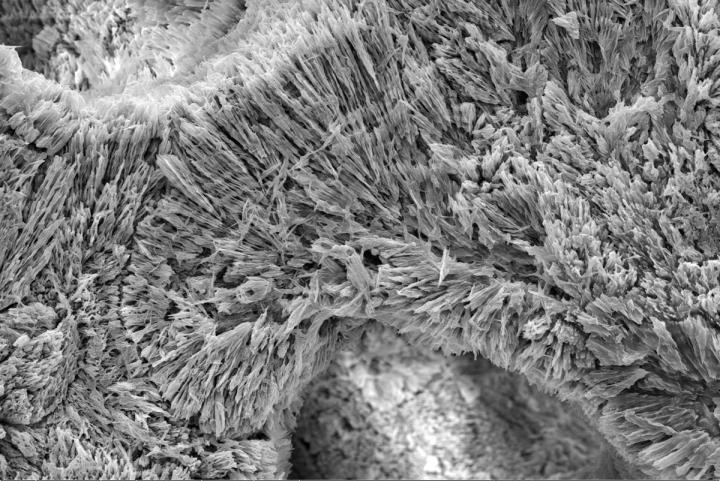 Luckily, scientists have developed an improved method, a combination of high-resolution microscopic analysis and geochemical modeling. Researchers described the new technique this week in the journal Frontiers in Marine Science.

Deciphering the climate records coded in coral skeletons is similar to deciphering tree rings. As coral grows, new layers of calcium are deposited. Each layer traps geochemical signatures that can provide clues to the climatic conditions.

By measuring the amount of strontium and the lighter isotope of oxygen trapped in different calcium layers, scientists can estimate ancient sea surface temperatures. However, the technique isn’t perfect.

“Remarkably, the coral records are accurate most of the time, but there are instances where measurements have been off by as much as nine degrees Celsius, and this needs to be rectified,” Bruce Fouke, a professor of geology and microbiology at the University of Illinois, said in a news release.

As they grow, coral polyps deposit aragonite, a crystallized form of calcium carbonate. Unfortunately for climate scientists, seawater can also deposit aragonite crystals as it passes through the coral skeleton. Through a process called diagenesis, these seawater-derived crystals can alter the skeleton’s chemistry.

“It is difficult to tell the diagenetic aragonite from the original coral skeleton without using high-powered microscopes,” said Kyle Fouke, an undergraduate student at Bucknell University. “It is also challenging to know exactly when the diagenetic alteration took place — days or decades after the skeletons were formed. Unless you are using the newest microscopy techniques to help select your samples, you could be collecting and measuring a mix of the two very different temperature records.”

“Based on our analyses, we see that the older portions of the coral heads growing in deeper seawater contain a higher concentration of diagenetic aragonite,” Fouke said.

The team of scientists was able to differentiate between the coral and diagenetic aragonite using a combination of light, electron and X-ray microscopy techniques. The high-definition imaging techniques also revealed an array of different aragonite crystallization patterns. Scientists suggest some patterns represent seasonal variations in skeletal growth, while other smaller-scale patterns likely code geochemical changes on a daily cycle.

Researchers used their findings to develop a correction factor that can be applied to previous coral surveys and other climate studies that relied on aragonite analysis.

“Because this has been achieved using the carbonate mineral aragonite, which is ubiquitous among marine life, this same correction factor can be used with other sea creatures that secrete carbonate skeletons and shells,” Fouke said.