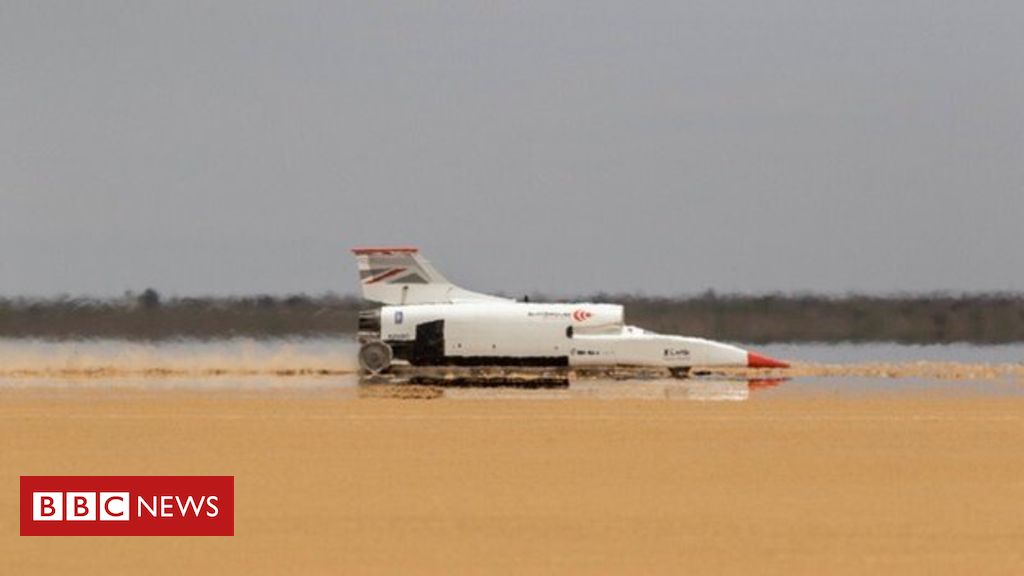 The Bloodhound vehicle has become the third fastest British car of all time – unofficially.

The arrow-shaped racer clocked a speed of 461mph (741km/h) as it powered across a dried-out lakebed in southern Africa’s Kalahari desert on Friday.

The only British cars to have gone faster are Thrust2 and Thrust SSC which both got well above 600mph (965km/h).

The driver on that occasion was RAF pilot Andy Green. The Wing Commander is at the controls again in Bloodhound.

His new car’s mark can only be unofficial because it wasn’t running under proper land speed record rules.

These require a car to make two runs through a measured mile inside an hour. The recognised speed is then the average of the two passes.

The racing must be overseen by world motorsport’s governing body, the Federation Internationale de l’Automobile (FIA).

Nonetheless, Bloodhound is starting to demonstrate its potential as it sets its sights on bettering Thrust SSC’s supersonic achievements.

The Bloodhound car is conducting what are described as high-speed trials on Hakskeen Pan.

Engineers are working through a series of tests to verify the vehicle’s design and the proper working of its subsystems.

Friday’s outing was the car’s fifth run across the desert, intended to examine its stability and brake chute performance.

A further Friday run was abandoned when the crosswinds started to gust beyond acceptable limits.

It was the last official mark to hold the land speed record with a wheel-driven vehicle. All subsequent records have been set by jet or rocket-powered cars.

Bloodhound is using a Rolls-Royce EJ200 turbofan to get itself rolling and to accelerate through the lower hundreds mph.

A monopropellant rocket from the Norwegian Nammo company, when it’s hung below the jet next year, should enable Bloodhound to punch through the sound barrier and attack Thrust SSC’s world record.

The Bloodhound project is led from the UK but is being hosted by the Northern Cape government. Local people have cleared Hakskeen Pan of stones. The hope is this flat lakebed can become a draw for other racers in the future.