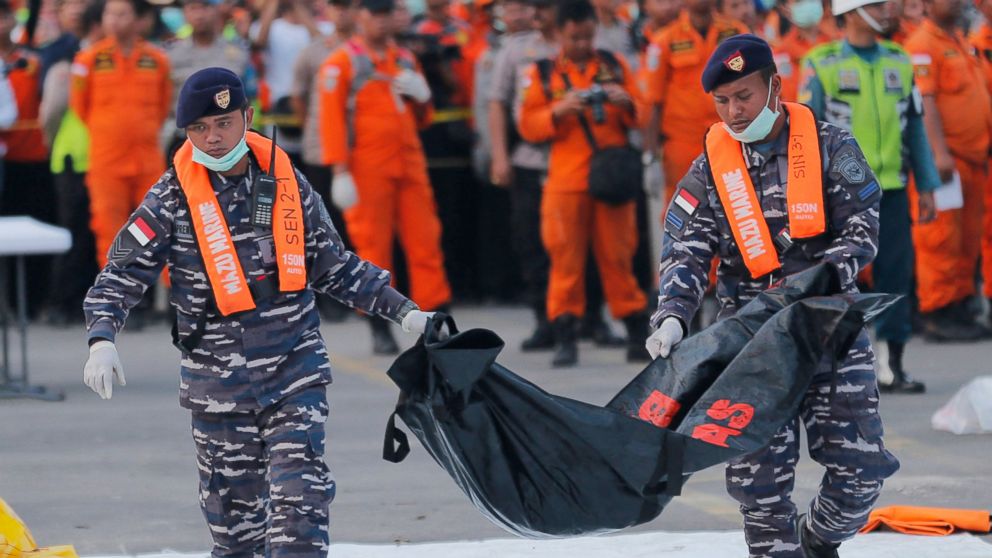 A crucial sensor was replaced on a Lion Air jet the day before it plunged into the Java Sea, and that sensor replacement may have exacerbated other problems with the plane, Indonesian investigators said Wednesday.

That sensor, known as the “angle of attack” sensor, keeps track of the angle of the aircraft nose to help prevent the plane from stalling and diving.

Earlier this week, Indonesian officials hinted that airspeed indicators played a role in the deadly Oct. 29 crash that killed all 189 people on board.

The jet’s airspeed indicator malfunctioned on its last four flights, and that problem was related to the sensor issue, said Soerjanto Tjahjono, chairman of Indonesia’s National Transportation Safety Committee, on Wednesday.

On the Oct. 28 flight, from Bali to Jakarta, the pilot’s and copilot’s sensors disagreed. The 2-month-old plane went into a sudden dive minutes after takeoff, which the pilots were able to recover from. They decided to fly on to Jakarta at a lower-than-normal altitude.

The next day, during the deadly crash, the plane hit the water at very high speed just 13 minutes after takeoff from Jakarta. Its flight crew had requested permission to return to the airport several minutes after taking off.

“The point is that after the AOA (sensor) is replaced, the problem is not solved but the problem might even increase. Is this fatal? NTSC (National Transportation Safety Committee) wants to explore this,” he said.

Even if an angle of attack sensor on a jet is faulty, there’s generally a backup system in place for the critical component, and pilots are trained to handle a plane safely if those sensors fail, airline safety experts said.

There are audio signals and physical warnings that can alert the pilot to malfunctioning equipment or other dangers, said Todd Curtis, director of the Airsafe.com Foundation.

“They should have been completely engaged in what was going on inside that cockpit, and any kind of warning that came up, they would have been wise to pay attention to it,” Curtis said.

Investigators are likely focused on how a single sensor’s failure resulted in a faulty command that didn’t take into account information from a second sensor, said John Cox, CEO of Safety Operating Systems.

Boeing, which manufactured the Lion Air plane, issues safety-related bulletins, and had previously circulated instructions about what flight crews should do if sensors fail.

Indonesia’s National Transportation Safety Committee said it had agreed with Boeing on procedures that the airplane manufacturer should distribute globally on how flight crews can deal with “angle of attack” sensor problems.

But a Boeing statement said a safety bulletin, sent to airlines on Tuesday, directs flight crews to existing guidelines on how they should respond to erroneous “angle of attack” data. It wasn’t immediately clear if it plans an update, though comments from Indonesian officials indicate they expect one.

Indonesian investigators said their flight procedure recommendations to Boeing were based on how the flight crew responded to problems on the Bali-to-Jakarta flight.

“The draft of what will be conveyed by Boeing this morning has been presented to us,” said air accident investigator Nurcahyo Utomo.

“There are some things that we ask for explanation and some that we ask to be removed, and there has been an agreement between the NTSC and Boeing to release a new procedure to all Boeing 737 MAX users in the world,” he said.

Indonesia’s search and rescue agency on Wednesday extended the search effort for a second time, saying it will continue until Sunday. Body parts are still being recovered and searchers continue to hunt for the cockpit voice recorder.

The Lion Air crash is the worst airline disaster in Indonesia since 1997, when 234 people died on a Garuda flight near Medan. In December 2014, an AirAsia flight from Surabaya to Singapore plunged into the sea, killing all 162 on board.

Lion Air is one of Indonesia’s youngest airlines but has grown rapidly, flying to dozens of domestic and international destinations. It has been expanding aggressively in Southeast Asia, a fast-growing region of more than 600 million people.