Bank of England governor Andrew Bailey has warned Brussels against creating a “serious escalation” by forcing firms to relocate euro clearing business away from the UK.

Mr Bailey told MPs Britain should “resist very firmly” any attempt by the EU to try to dismantle by “dubious” means the dominance of London in clearing euro-denominated derivatives – a business sometimes described as the plumbing of the financial market.

It was the latest broadside by the governor on Europe, two weeks after he took Brussels to task over its apparent intransigence on granting post-Brexit “equivalence” for Britain’s financial services sector.

Appearing before the Treasury select committee on Wednesday, Mr Bailey said that stand-off now risked becoming a “side show” amid reports about the EU’s attempt to shift euro-denominated clearing to the continent.

Europe’s top banks are being asked by Brussels to justify why they should not have to do so, according to a report by the Reuters news agency earlier this week.

But three-quarters of the business is carried out on behalf of non-EU firms and trying to force them to shift their business away from London could involve methods of “dubious legality”, Mr Bailey told MPs.

The governor described the sums involved in the business as “eye-watering” and “staggering”, with London’s main clearing house, LCH, dealing with €83.5trn of euro clearing.

More from Bank Of England

A temporary “equivalence” granted by Brussels until mid-2022 means the business can continue for now, but removing it would force 25% to shift to Europe.

Mr Bailey said: “I think the debate that’s now building up… is that if only 25% moves, it isn’t really very viable.

“To get the other 75% would require something very controversial such as an attempt at extra-territorial legislation or an attempt to force or cajole banks and dealers to say ‘there will be some other penalty for you unless you move this clearing activity into the euro area’.

“That seems to be where the debate’s heading.” 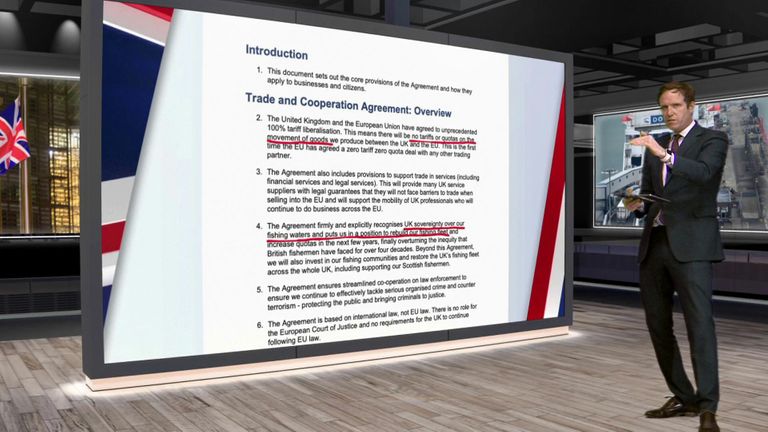 What’s in the Brexit trade deal?

Mr Bailey said this seemed to have been a revival of “location policy” that pre-dated Brexit, but had been given a stimulus by the divorce.

Mr Bailey told the committee that “extra-territorial” legislation was the less likely scenario and that instead firms could be told “you need to move this business into our area – if you don’t, we’ll think of something else to do”.

“That would be very controversial, frankly I think it would be a very serious escalation of the issue,” he added.