As Wall Street economists up the odds for a recession in the coming year, the bond market is sending its own scary warning about an economic downturn.

Various parts of the yield curve have been inverted, but the traditionally watched 2-year to 10-year spread looks set to invert any day now, with the curve at its flattest level since 2007.

The 10-year yield, at its low yield of 1.64% Monday came less than 6 basis points above the 2-year yield, which was at 1.58% in afternoon trading. The spread broke below 10 basis points last week. An inverted curve simply means a shorter-term interest rate is higher than the longer-term one that it is being compared too, and that inversion has been a reliable recession signal.

The Fed watches the spread between the 3-month bill yield and the 10-year note yield which has been inverted, but the markets traditionally have watched the 10-year and the yield on the 2-year note. 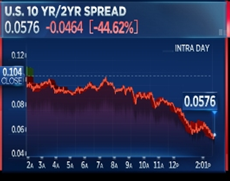 “I don’t know if it matters more than the 3-month to the 10-year, but you can call it the final nail in this whole yield curve inversion discussion,” said Peter Boockvar, chief investment officer at Bleakley Advisory Group.

Economists lately have been more concerned about the chances for a recession. Bank of America Merrill Lynch economists said they see odds for a recession now at a 1-in-3 chance in the next 12 months, and Goldman Sachs economists lowered their forecast for fourth quarter growth to 1.8% and said fears of a recession are growing because of the trade war.

The spread between the 3-month Treasury bill and the 10-year note has been inverted with the 3-month bill yielding about 35 basis points more. The benchmark 10-year note yield has been falling as global interest rates decline in a flight-to-safety play and on worries about economic growth.

The 10-year yield, now near its lowest level since October, 2016, influences lending rates for mortgages and other business and consumer loans. Strategist say the curve has to remain inverted for some time to reliably signal recession.

“People express their shorter-term market opinions in the 10-years or less. The next question is how long does it stay that way,” said Boockvar. “I still think the rest of the curve is saying a lot, and it stayed inverted for more than a month.”

Jon Hill, BMO rate strategist, said Tuesday’s CPI could be a factor that pushes the yields closer together, or if the number misses the market and is weak, possibly wider apart. A weaker number could make the 2-year yield fall, with expectations that the Fed may cut rates more.

“It’s an interesting moment from a fundamental perspective. Steeper makes sense but the flight to quality we’ve seen and falling inflation compensation has really pushed back against that,” said Hill.

According to Dow Jones, core CPI is expected to show that consumer inflation rose 0.2% in July, or 2.1% year over year.

“I think it’s yet another recession signal … and I don’t know which one is scariest,” said Hill of the flattening spread. He said the fact the yield curve is flattening after the Fed cut interest rates is a negative sign.

“It’s complicated by the ratcheting up in trade tensions, but right now it seems that the current stance of monetary policy is insufficiently accommodative,” he said.