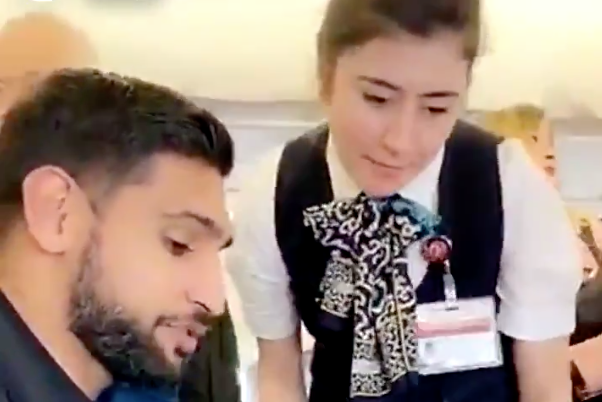 Amir Khan was the subject of widespread mockery on social media on Sunday after a video emerged of him appearing to do something stupid.

While on a plane headed for a holiday in Istanbul, his wife Faryal Makhdoom recorded him mistakenly asking a flight attendant whether the ‘White Chocolate Mouse’ on the food menu was edible.

However, the full video has now emerged and it seems Khan will be the one having the last laugh.

The former world champion actually turned to the camera before the flight attendant came over and pointed out that he knew the menu said ‘White Chocolate Mousse,’ but was going to pretend otherwise to prank her.

In the end, he pranked the entire internet who all believed he’d once again put his foot in it.

✈️ The second half of this video went viral yesterday, but it didn’t quite show the full story…

🐭 Who knew all this time that Amir Khan was secretly the greatest troll on planet Earth? pic.twitter.com/UHSrRbJU94

As for his boxing career, Khan returned to the ring on July 12 with a win over Billy Dib in Saudi Arabia.

He subsequently announced a fight with Manny Pacquiao for November in the same country, however this was then refuted.

As things stand, Khan will be returning in Saudi Arabia this November, though his opponent is as yet unknown.