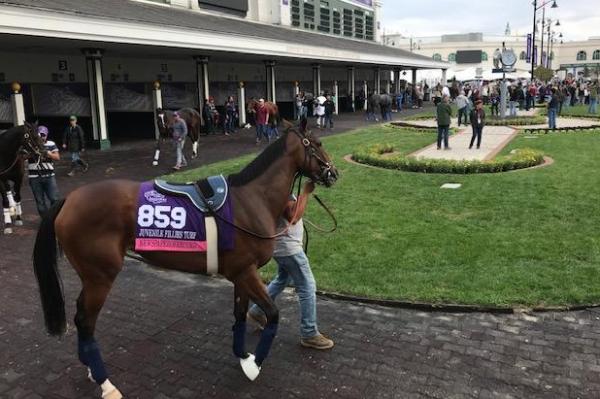 Oct. 31 (UPI) — When Breeders’ Cup officials decided to group all five championship races for 2-year-olds on Friday’s program, they created a “one-stop shop” for future stars in both North America and Europe — and a massive handicapping challenge.

The first-ever “Future Stars” card kicks off the 35th Breeders’ Cup World Championships, back at Churchill Downs for the first time since 2011 and the ninth time overall. The nine races for older horses will be run Saturday.

For handicappers, the issue with the “Future Stars” is, well, trying to see into the future. For many of these still-developing horses, there’s not much history to consider. Still, one must try so here’s how the five races shape up, in running order.

This is a new race which obviously filled a need because there’s a full field of 12 and four more on the also-eligible list. As with many of the Breeders’ Cup grass races, there’s a strong European contingent. But the favorite, albeit a lukewarm one at 4-1, is Strike Silver, a Violence colt trained by Mark Casse who has two wins and a second from three earlier starts. He won the Indian Summer Stakes at Keeneland Oct. 7 in his first start on the grass.

Trainer Wesley Ward will saddle four in this event with Shang Shang Shang rated best of the bunch. Shang Shang Shang, a Shanghai Bobby filly, is 2-for-2 with the wins including the Group 2 Norfolk Stakes at Royal Ascot in June.

The European contingent features the Aidan O’Brien-trained Sergei Prokofiev, a Group 3 winner in England in his last start, and Soldier’s Call, an Archie Watson trainee who finished third in his last start in a Group 1 at Longchamp in Paris.

The race is 5 1/2 furlongs around one turn. The weather forecast is for rain Thursday and Friday, which will soften the turf. That would be a valuable handicapping tool.

Another overflow field signed up for this one but, unlike the day’s other races, there is a strong and legitimate favorite in Newspaperofrecord. The Irish-bred miss, by Lope de Vega, is 2-for-2, winning at first asking at Saratoga in August by 6 3/4 lengths, then taking the Grade II Ms. Grillo at Belmont Park by 6 1/2 lengths Sept. 30. Both races were at 1 1/16 so she should have no problem with Friday’s mile. And both were over yielding turf so the threat of rain is no threat to her. Trainer Chad Brown and jockey Irad Ortiz don’t hurt the cause.

But they run these for a reason and there are others with credentials. Concrete Rose also is 2-for-2 with a win in the Grade II Jessamine at Keeneland on her resume. And a powerful European representation features Just Wonderful, trained by Aidan O’Brien with Ryan Moore to ride. She exits a win in the Group 2 Shadwell Rockfell Stakes at Newmarket.

There are plenty of others with juicy odds, at least on the morning line. Lily’s Candle was a Group 1 winner in France last time out. Godolphin’s La Pelosa came from England to win the Grade I Natalma at Woodbine in her most recent start. East, a daughter of Frankel, is 2-for-2 in Europe. The Mackem Bullet looks poised for a good effort after winning the Group 1 Juddmonte Cheveley Park at Newmarket.

A relatively compact field of 10 will go 1 1/16 miles around two turns on the main track in this event with California raider Bellafina a 2-1 favorite on Mike Battaglia’s morning line. Trained by Simon Callaghan, the Quality Road filly won the two most important Grade I preps for this at Del Mar and Santa Anita.

But competition comes from all the major racing jurisdictions. Jaywalk won the Grade I Frizette at Belmont Park. Restless Rider won the Grade I Alcibiades at Keeneland. Sippican Harbor won the Grade I Spinaway at Saratoga. Serengeti Empress won the Ellis Park Debutante by 13 1/2 lengths and the Grade II Pocahontas over the Churchill Downs course by 19 1/2 lengths in her last two starts.

Did we mention it’s not easy handicapping the 2-year-olds? However it turns out, the winner of this automatically becomes the leading candidate for the 2019 Kentucky Oaks.

This 1-mile race on the grass also has an overflow field with 14 entered plus two in waiting. There’s a nice mix of English, French and Irish colts and an equally fine roster of American turf runners.

Churchill Downs oddsmaker Mike Battaglia tabs Anthony Van Dyke the 4-1 morning-line favorite despite his third-place finish in the Grade I Darley Dewhurst at Newmarket in his last race. The colt has all the right connections, however — owned by the Irish-based Coolmore juggernaut, trained by O’Brien and ridden Friday by Ryan Moore.

Coolmore’s chief international rival, Godolphin, fields Line of Duty in this race. Like Anthony Van Dyke, he’s by Galileo. He, however, sports a two-race winning streak including the Grade III Prix de Conde at Chantilly in his last start. William Buick rides for trainer Charlie Appleby — a potent combination this year.

Forty Under and Current front the home team. Forty Under, an Uncle Mo colt trained by Jeremiah Englehart, won the Grade III Pilgrim at Belmonth Park over yielding turf Sept. 29. Current, by Curlin and trained by Todd Pletcher, was just up to win the Grade III Bourbon at Keeneland Oct. 7 on firm ground.

As with the Juvenile Fillies, this event drew the winners of all the big prep races. That said, Battaglia makes Game Winner the 8-5 morning-line favorite. The Candy Ride colt, trained by Bob Baffert, is undefeated in three starts with wins in the Grade I Del Mar Futurity and Grade I American Pharoah at Santa Anita clearly making him the best in the west.

Barring complexities, the winner of this is the de facto early Kentucky Derby favorite.

And the getaway race …

There used to be a Breeders’ Cup Marathon but it was abandoned years ago. It now has become tradition that the host track cards a Marathon of its own during the championship weekend and Churchill Downs makes that the final race of the Friday program.