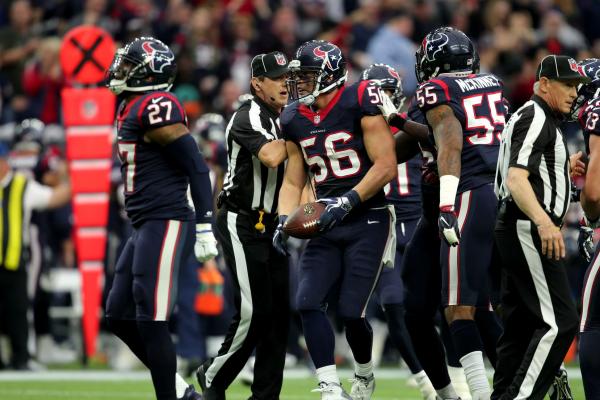 NFL commissioner Roger Goodell officially reinstated Cushing from his suspension. The Texans were granted a one-week roster exemption that expires Dec. 4. He can be activated at any time.

Whether he will return to play this week is still being determined. The former Pro-Bowl selection and NFL Defensive Rookie of the Year is in outstanding shape and fully healthy, according to a league source.

Cushing met with Texans head coach Bill O’Brien on Tuesday. O’Brien suggested that the Texans are in no rush to get Cushing back on the field and will evaluate his conditioning levels and readiness to play again.

“He’s been away from us for a while, obviously,” O’Brien said. “First things first, just personally we got to get caught up, see where he’s at, see how he’s doing, and then kind of go from there. Great guy, you guys know what I feel about Brian Cushing.”

Cushing has been suspended twice by the league for violations of its PED policy. The first came in 2010, his second season with the team after being a first-round draft choice from USC. It was reported at the time that Cushing tested positive for a fertility drug that has frequently been used to restart natural testosterone production.

As a repeat offender, Cushing faced a mandatory 10-game suspension. He did not appeal.

“I don’t know the details of everything,” O’Brien said. “I’m sure he would stand up here and tell you that in some ways he feels bad that that happened, obviously. The way that I feel about Brian Cushing, I’m not going to go down that road.

“I think that everybody makes mistakes and sometimes you pay for your mistakes in different ways. He’s meant a lot to me in my four years here. He’s a tough guy, been a captain for us. I’m just looking forward to sitting down with him and talking to him and kind of seeing where he’s at with everything.”

The Texans are deep at inside linebacker. They are starting Benardrick McKinney and Zach Cunningham and also have rookie Dylan Cole.

“I think being in football-playing shape and being in shape are two totally different things, really,” O’Brien said. “There’s no assumptions being made here. We’re not in a rush to do anything. We have a lot of guys playing right now at a pretty high level on defense, so we’ll see how Brian’s doing and we’ll go from there.”