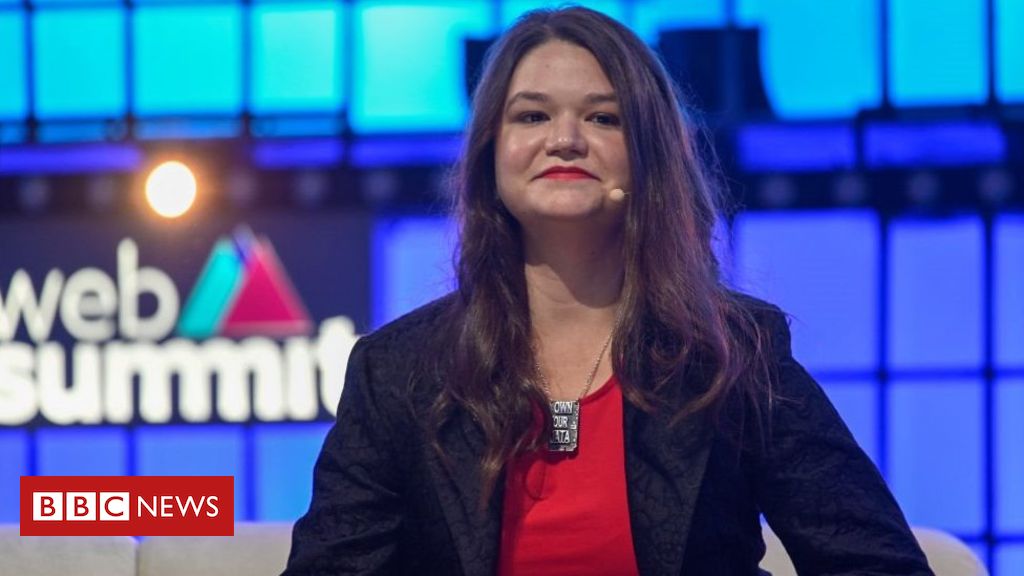 Former Cambridge Analytica employee Brittany Kaiser, recognisable to many as the unlikely star of the Netflix documentary The Great Hack, has appeared at Web Summit in Lisbon.

The documentary followed the self-styled whistleblower as she testified to the UK parliament about what she knew when she worked at the firm as a business development manager.

Now with a book out, she has reinvented herself as a data privacy guru aiming to educate youngsters about disinformation, and planning to put data back into the hands of users via blockchain technology.

The Cambridge Analytica scandal broke in 2016 when it emerged that the data of up to 87 million Facebook users had been harvested via a personality quiz – and it’s never been exactly clear how it was used.

The consultancy aided Donald Trump’s election campaign. And Ms Kaiser appeared on the firm’s behalf at a Leave.EU Brexit press briefing – the two organisations say they never signed a contract to work together but Ms Kaiser has alleged that “chargeable work was done”.

In an interview with the BBC, Ms Kaiser said she wanted to see political advertising on Facebook banned.

She said she feared little had changed. Hundreds of companies around the world are still crunching through personal data and throwing it back at people in the form of political ads, she said.

“It is sad that we have to ban all forms of political advertising to stop people being manipulated. But it has to be done,” she added.

“Our electoral laws are not fit for purpose. Facebook functions pretty much the same and now it is not going to ban any politicians who are sending disinformation our way.”

While Twitter has moved to ban political advertising, Facebook has not, and she thinks it will need government regulation to force it to.

It’s important, she said, because of the way data is being “weaponised” in political campaigning.

“Data-driven campaigning gives you the edge that you need to convince swing votes one way or the other, and also to get certain people to show up to the polls,” she said.

“It can also be used to turn off your opponents and get people not to show up to the polls.”

In her book Targeted, she provides new details about the methods she claims were used by Cambridge Analytica in the US presidential election, in particular how it gathered information on different personality types and sent them adverts most likely to resonate with them. The use of so-called psychographics in the Trump campaign had been denied by the firm before its collapse.

“What I saw when I was at Cambridge Analytica was that individuals were deemed persuadable, I don’t mean persuadable to vote for Donald Trump, but persuadable to not vote for Hillary Clinton,” she told the BBC.

“So it was to deter them from going to the polls. And that is the type of tactics where you can use this information in order to persuade certain people to disengage from the political process.”

She gave specific examples of her claims: “We saw an old quote from Michelle Obama being turned into an advertisement that made it look like she was criticising Hillary for staying with her husband, who cheated on her, and that was being targeted at conservative women to get them to not support her.”

An old 1996 speech by Hillary Clinton in which she talks about young black men joining gangs was targeted at African Americans, she said, to dissuade them from voting for the Democrat.

Ms Kaiser said the personality profiling done by Cambridge Analytica was good at targeting “people who are neurotic, and sending them fear-based messaging”.

“Sending messages to people who were extroverted and open-minded wasn’t very effective,” she added.

Some regard Ms Kaiser as an unreliable witness, and question whether her whistleblowing was done more to save herself than to expose the company she worked for.

Prof David Carroll, a data privacy expert who also played a pivotal role in The Great Hack, told the BBC that he thought she was “an important witness to history”.

But he believes that in her book she “obfuscates and omits key aspects, to protect her reputation and her friends”.

In her BBC interview, Ms Kaiser addressed her critics: “Most of those people have no idea how hard it is to be a whistleblower.”

“I spent the past year and a half being unpaid, doing pro-bono work for governments around the world by being an expert witness… never knowing if I’d ever get a job again, never knowing if I was going to be persecuted or if I would be threatened with physical violence.

“You really start to wonder who’s going to come after you.”

It is all a long way from when she entered the world of politics and data, in the Obama campaign, to “figure out what got people excited about politics”.

“I never expected when I joined a company that was going to teach me more advanced forms of data science, that there was going to be anything malicious about it,” she said. “It’s never too late to decide to do the right thing.”

Critics question what she did during her time at Cambridge Analytica. She has been accused of deploying Israeli hackers to influence the presidential election in Nigeria in 2015, something she denies.

“In Nigeria I met with clients who are actually private businessmen, not the campaign itself, who wanted to fund an external campaign. And so I helped, put together a team and sent people out there. They were only there for three weeks, so nothing that they did was really that big or that effective,” she told the BBC.

And what of Alexander Nix, her former employer with whom she is portrayed as having an affectionate friendship in the Great Hack?

She told the BBC she was no longer in contact with him – in fact a text message wishing her luck in her testimony to the UK parliament in 2016 was the last time she heard from him, she said.

But she said she believes he is still involved in political consultancy work.

“I hope he has learned from his mistakes and is working more ethically.”

Listen to more of the BBC’s interview with Brittany Kaiser on the BBC World Service’s Business Daily.

Owls may have inherited their night-hunting abilities from dinosaurs

Astronauts splash down in Gulf of Mexico off Florida

SpaceX Crew-1 astronauts to return to Earth from ISS