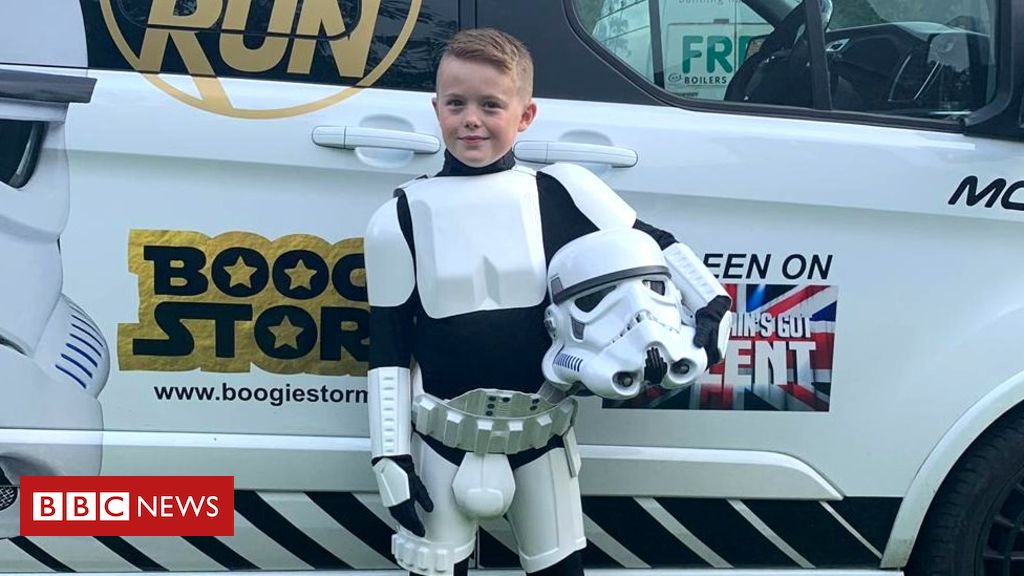 When Kevin Turner was eight, he was forced to move schools after being bullied because of his love of dancing.

Three years later, he has had the last laugh, being unmasked as the secret young star of the first episode of Britain’s Got Talent: The Champions.

Kevin, now 11, was picked to join the dancing Stormtroopers in Boogie Storm.

They don’t normally show their faces, but leader Lee Seddon said: “He’s gone through tough times and I thought it was important to get his story across.”

Liverpool-based Boogie Storm shot to fame in 2016 when they reached the talent show final by performing acrobatic dance routines in the Star Wars uniforms.

They wanted to recruit a mini Stormtrooper for the all-star version, which began on ITV on Saturday, and chose Kevin from hundreds of hopefuls.

“I couldn’t believe it really,” Kevin told the BBC after being given permission to reveal his identity. Keeping his appearance secret for several weeks was tough, he said. “It was like torture!”

Kevin, from Crosby, Merseyside, has taken dance classes since the age of six, but started getting bullied when he danced along to songs at school. He was given such a hard time that his parents moved him to a new school.

“It made me feel like I should stop dancing,” he said. “But then I just realised that I shouldn’t stop because I’m so keen on it.”

When his BGT preparations meant he had to miss lessons, he told friends and teachers he had to “do some rehearsals for this small competition in London”.

Kevin began the TV performance flossing on a podium before joining the group’s other masked dancers on stage.

Their routine went down well with Simon Cowell, who joked that the young masked member might be his son. “You’re not Eric, are you?” he laughed.

Boogie Storm were Cowell’s “favourite act of the night”, the judge said, adding: “And you’ve shrunk. We have the next generation of Stormtroopers. This is everything I’ve always wanted. I’m actually quite emotional.”

However, the group weren’t among the two acts who got picked to go through to the final.

‘You stick to it’

Boogie Storm creator Seddon said Kevin stood out when they were searching for talent. “Watching him, you could just see that he loved what he was doing, and he was so passionate about it, and his ability was second to none for his age,” he said.

Seddon initially asked Kevin’s family to sign a non-disclosure agreement to keep his identity a secret – but then changed his mind.

“It’s been my rule ever since day one not to show the guys because it’s not about who’s inside the costume,” he said. “I thought about it and I thought Kevin deserves his chance and his time in the spotlight.

“And I wanted to show these people that no matter what you do in life, if you’re passionate about something – it could be dance or it could be football – you stick to it, and you don’t listen to other people.

“That’s why I wanted to get that story across and that’s why I broke the rule for Kevin.”