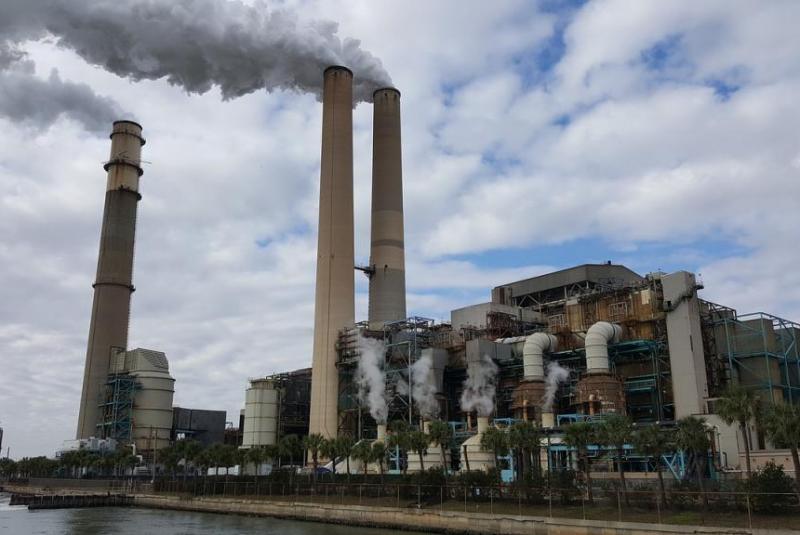 Nov. 8 (UPI) — Earlier this year, the U.S. Department of Energy’s Office of Fossil Energy announced $ 110 million in federal funding for research and development of carbon capture and storage projects.

According to DOE, carbon capture and storage technologies, or CCS, are “increasingly becoming widely accepted as a viable option” for coal- or gas-fired power plants to reduce their emissions.

Carbon capture technologies promise to scrub CO2 from the flumes and exhaust pipes of coal and gas plants. The captured carbon can be permanently buried underground or sold for other uses like making fertilizers or boosting oil extraction. The technologies have been tested on small scales, but high costs have prevented wide-scale adoption.

While subsidy-free wind and solar power now offer the cheapest sources of electricity generation in most major economies — and continue to dominate new electric generating capacity — only a handful of operating carbon capture facilities exist.

And quite a few climate scientists and clean energy advocates hope it stays that way.

The United Nations latest climate report calls on the world’s governments to cut emissions in half by 2030 and to zero by 2040 in order to limit global warming to 1.5 degrees Celsius above preindustrial averages, a threshold for avoiding the worst impacts of climate change. The United Nations report — and the cost minimization models used by the report’s authors — suggests carbon capture technologies could be part of the path to carbon neutrality.

Jacobson isn’t convinced. He recently published a study in the journal Energy and Environmental Science suggesting these technologies do more harm than good.

According to Jacobson, many of the models that purport to demonstrate the viability of carbon capture overestimate the technology’s efficiency.

“All these other groups that use models, they just assume that the technology captures 85 to 90 percent,” he said.

For his study, Jacobson didn’t rely on models. He used the first six months of carbon capture data recorded at Petra Nova, a coal-burning power plant built in Texas with a post-combustion carbon capture treatment system. The data showed the technology was just 55.4 percent efficient during the six months, on average.

“But that’s not even the major issue,” Jacobson said. “The major issue is what is not even considered by their models, and that is that they literally built a natural gas plant to power their carbon capture technology.”

Models favorable to carbon capture’s potential ignore the upstream emissions and air pollution impacts, he said. In the case of Petra Nova, that is the emissions release and pollution caused by all that goes into constructing and fueling a gas power plant.

When Jacobson accounted for the upstream impacts, he found the Petra Nova project reduced the coal boiler’s emissions by just 10 percent.

It would be much better, Jacobson contends, to simply build renewable energy to produce the equivalent power provided by the Petra Nova plant. In fact, Jacobson suggests it would be better to simply do nothing than increase upstream air pollution inputs with inefficient carbon capture projects.

James Mulligan agrees that all things being equal, renewable energy is superior to carbon capture as an energy solution for climate change mitigation. But according to Mulligan, things aren’t always equal.

Billions of dollars are spent every year on new gas power plants, and thousands more power plants with purchasing agreements ensure they will be online for many more years.

Mulligan argues Jacobson’s contention that it would be better to not do anything at all than to deploy carbon capture technology is based on flawed assumptions.

“Jacobson is a huge advocate of 100 percent renewable,” Mulligan told UPI. “His research is a good reminder that we should be shooting for as much renewable as possible, but he’s trying to kneecap an entire technology by painting a very shoddy picture of the very first power plant.”

Mulligan’s first issue is with Jacobson’s use of Petra Nova’s efficiency data.

“I’m not sure if someone botched the deployment of the system, or they simply weren’t operating at full capacity in their first six months,” he said. “Jacobson doesn’t know either, because he doesn’t ask. But we know this technology can capture up to 90 percent of CO2 emissions.”

Mulligan likened Jacbonson’s assumption to taking an umbrella out in the rain, failing to open it up and concluding that it doesn’t work.

“If we did that, we’d be called fools,” Mulligan said.

Supporters of carbon capture technology suggest steps can be taken to reduce upstream emissions and other environmental impacts. Carbon capture systems also can be powered by renewable energy.

Jacobson’s research suggests the Earth and its atmosphere would be better off if renewable energy were built to replace fossil fuels, not power technology designed to reduce the emissions of fossil fuel sources.

But scenarios might exist in which renewables aren’t a viable option, Mulligan said.

“Renewable energy is great for providing electricity. Less great for providing on-demand high-quality thermal energy for industrial processes,” Mulligan said. “It also does nothing for emissions from concrete. In these applications, even groups like Greenpeace and Sunrise acknowledge we’ll likely need CCS.”

A risk also exists that as renewable energy becomes the dominant source of energy, its reliability will become an issue. Solar and wind are cheap, but they’re not available all the time. Until better, cheaper battery storage technologies come along, some fossil fuel plants will need to continue to operate to maintain the power grid’s reliability and ensure prices don’t skyrocket.

It would be better, Mulligan argues, if regulation mandated that fossil fuel power plants that must continue to exist, for whatever reason, be retrofitted with carbon capture technology.

But Jacobson’s isn’t the only study that has painted carbon capture in an unfavorable light. Another paper, published last spring in the journal Nature Energy, found that renewables were far superior to CCS from the standpoint of energy return-on-investment.

“Given its net energy disadvantages, carbon capture and storage should be considered a niche and supplementary contributor to the energy system, rather than be seen as a critical technology option as current climate agreements view it,” Denes Csala, a lecturer in energy storage and system dynamics at Lancaster University, said in a statement.

Carbon capture has allies in the oil and gas industry and the labor sector — many unions see it as a lifeline for fossil fuel industry jobs — and has been characterized as “essential” to climate change mitigation by the International Energy Agency. The United Nations has acknowledged that the technology could be used as one of many solutions for carbon emissions reductions.

But plenty of environmental advocates remain opposed. In 2017, Michael Bloomberg told a crowd at the Bloomberg New Energy Finance summit that the technology was “a figment of the imagination.” Last year, Al Gore told Axios that he thought carbon capture was “nonsense.”

Critics of carbon capture worry that the technology will usurp public and private funds that otherwise might be used for renewable energy, as well as further entrench the interests of the fossil fuel industry, which controls much of the technology involved in carbon capture.

A report published this year by the Center for International Environmental Law echoes these concerns.

“We need to transition away from reliance on fossil fuels,” researchers wrote. “Anything that moves us toward greater reliance will not be a solution, and the push for geoengineering is likely to do exactly that.”

Another report by Clean Air Task Force, an environmental non-profit group friendly to “low carbon” alternatives to renewables determined the development of carbon capture technologies would not displace wind and solar projects.

Mulligan agrees that CCS should mostly be reserved for special circumstances, but he doesn’t think the technology should be impugned unconditionally.

“I don’t want to take the CCS option off the table,” he said. “This isn’t about doing CCS instead of renewable energy. This is about managing the risk that our first-best preference for decarbonization fails to fully and completely deliver on a tight timetable.”

If there’s one thing on which those friendly to and antagonistic towards CCS can agree, it’s that carbon isn’t properly priced by world governments or major economies. One way to fix that would be a carbon tax.

But while a carbon tax and a real price on carbon would make CCS projects viable in the short run, a hard price on carbon also likely would accelerate the demise of fossil fuel energy and prove a boon to renewable energy and storage technologies.