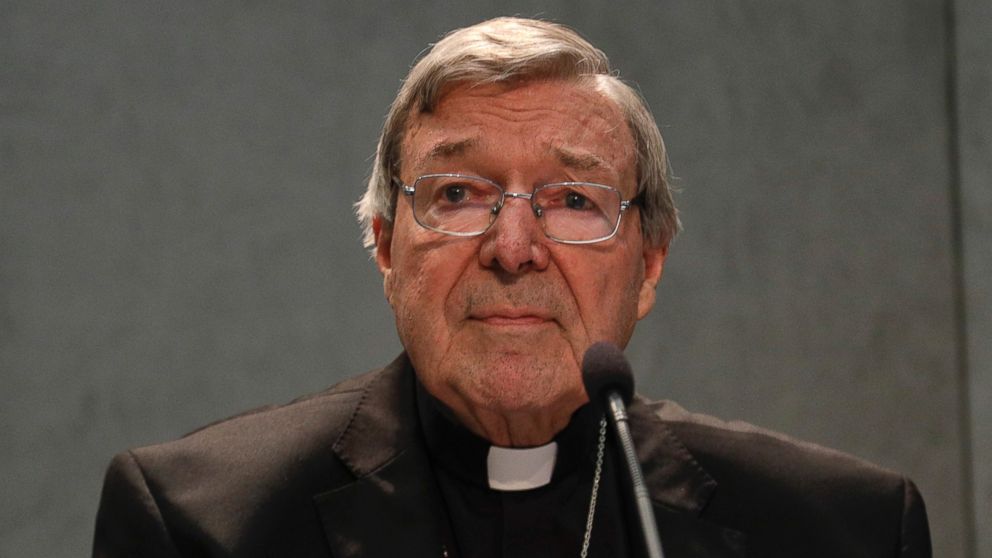 Cardinal George Pell, one of Pope Francis‘ top advisers, took a leave of absence as the Vatican’s financial czar on Thursday to fight multiple criminal charges in his native Australia that allege he committed sexual assault years ago.

Pell appeared before reporters in the Vatican press office to forcefully deny the accusations, denounce what he called a “relentless character assassination” in the media and announce he would return to Australia to clear his name.

“I repeat that I am innocent of these charges. They are false. The whole idea of sexual abuse is abhorrent to me,” Pell said.

The Vatican said the leave takes effect immediately and that Pell will not participate in any public liturgical event while it is in place. Pell said he intends to eventually return to Rome to resume his work as prefect of the Vatican’s economy ministry.

Pell, 76, is the highest-ranking Vatican official ever to be charged in the church’s long-running sexual abuse scandal, and the developments pose a major and immediate new obstacle for Francis as he works to reform the Vatican.

Victoria state Police Deputy Commissioner Shane Patton announced the charges Thursday, saying police had summonsed Pell to appear in court to face multiple counts of “historical sexual assault offenses,” meaning offenses that generally occurred some time ago. Patton said there are multiple complainants against Pell, but gave no other details on the allegations against the cardinal.

Pell was ordered to appear in Melbourne Magistrates Court on July 18.

Vatican spokesman Greg Burke said the Holy See had learned with “regret” of the charges and that the work of Pell’s office would continue in his absence, albeit only its “ordinary” affairs.

In a statement he read to reporters while sitting beside Pell, Burke said the Vatican respected Australia’s justice system but recalled that the cardinal had “openly and repeatedly condemned as immoral and intolerable” acts of sexual abuse against minors.

He noted that Pell had cooperated with Australia’s Royal Commission investigation into sex abuse and that as a bishop in Australia, he worked to protect children and compensate victims.

“The Holy Father, who has appreciated Cardinal Pell’s honesty during his three years of work in the Roman Curia, is grateful for his collaboration,” Burke added.

The charges were announced on a major Catholic feast day, when many of the world’s cardinals were already in Rome for a ceremony Wednesday to elevate five new cardinals. As Pell spoke to reporters, preparations were underway in St. Peter’s Square for a huge Mass that Pell had been expected to jointly celebrate, but he stood down after the charges were announced.

For years, Pell has faced allegations that he mishandled cases of clergy abuse when he was archbishop of Melbourne and, later, Sydney. But more recently, Pell himself became the focus of a clergy sex abuse investigation, with Victoria detectives flying to the Vatican last year to interview the cardinal. It is unclear what allegations the charges announced Thursday relate to, but two men, now in their 40s, have said previously that Pell touched them inappropriately at a swimming pool in the late 1970s, when Pell was a senior priest in Melbourne.

Patton told reporters in Melbourne that none of the allegations against Pell has been tested in any court, adding: “Cardinal Pell, like any other defendant, has a right to due process.”

The charges are a new and serious blow to Pope Francis, who has already suffered several credibility setbacks in his promised “zero tolerance” policy about sex abuse.

They will also further complicate Francis’ financial reform efforts at the Vatican, which were already strained by Pell’s repeated clashes with the Italian-dominated bureaucracy. Just last week, one of Pell’s top allies, the Vatican’s auditor general, resigned without explanation two years into a five-year term, immediately raising questions about whether the reform effort was doomed.

In his statement, Burke said Pell’s economy secretariat would continue working in his absence until other provisions are decided.

A prolonged absence, however, would require Francis to make other provisions, since it is unclear if the office could, for example, issue the Holy See’s annual financial statement without Pell’s imprimateur.

Pell’s actions as archbishop came under intense scrutiny in recent years by a government-authorized investigation into how the Catholic Church and other institutions have responded to the sexual abuse of children. Australia’s Royal Commission into Institutional Responses to Child Sexual Abuse — the nation’s highest form of inquiry — has found shocking levels of abuse in Australia’s Catholic Church, revealing earlier this year that 7 percent of Catholic priests were accused of sexually abusing children over the past several decades.

Last year, Pell acknowledged during his testimony to the commission that the Catholic Church had made “enormous mistakes” in allowing thousands of children to be raped and molested by priests. He conceded that he, too, had erred by often believing the priests over victims who alleged abuse. And he vowed to help end a rash of suicides that has plagued church abuse victims in his Australian hometown of Ballarat.

But he nevertheless became something of a scapegoat in Australia for all that went wrong with the Catholic Church in its mishandling of the sex abuse scandal. His flight to Rome to head Francis’ reform effort had been viewed by many of his critics as an attempt to avoid justice.

The Australian public has been riveted by the investigation, and news of his charges sparked a media frenzy. Both the police announcement and Pell’s statement from the Vatican were carried live across the country.

Australia has no extradition treaty with the Vatican. But in a statement from the Sydney Archdiocese, Pell said he would return to Australia “as soon as possible,” following advice and approval by his doctors. Last year, Pell declined to return to Australia to testify for the third time before the Royal Commission, saying he was too ill to fly. He instead testified via video conference from Rome.

The Blue Knot Foundation, an Australian support group for adult survivors of childhood abuse, said the decision to charge Pell sent a powerful message to both abuse survivors and society as a whole.

“It upholds that no one is above the law, no matter how high their office, qualifications, or standing,” the group’s head of research, Pam Stavropoulos, said in a statement.

But actually proving the charges may be difficult. The prosecution must prove that the sex offenses occurred beyond a reasonable doubt, which can be difficult when so much time has passed, said Lisa Flynn, national manager of Shine Lawyers’ abuse law practice in Australia.

The charges put the pope in a thorny position. In 2014, Francis won cautious praise from victims’ advocacy groups when he created a commission of outside experts to advise him and the broader church about “best practices” to fight abuse and protect children.

But the commission has since lost much of its credibility after its two members who were survivors of abuse left. Francis also scrapped the commission’s signature proposal — a tribunal section to hear cases of bishops who covered up for abuse — after Vatican officials objected.

In addition, Francis drew heated criticism for his 2015 appointment of a Chilean bishop accused by victims of helping cover up for Chile’s most notorious pedophile. The pope was later caught on videotape labeling the parishioners who opposed the nomination “leftists” and “stupid.”

Asked last year about the accusations against Pell, Francis said he would wait for Australian justice to take its course before speaking or casting judgment himself.

It remained unclear if Pell would face a church trial stemming from the accusations. The Vatican has clear-cut guidelines about initiating a canonical investigation if there is a semblance of truth to sex abuse accusations against a cleric. In the case of a cardinal, it would fall to Francis himself to judge. Penalties for a guilty verdict in a church trial include defrocking.