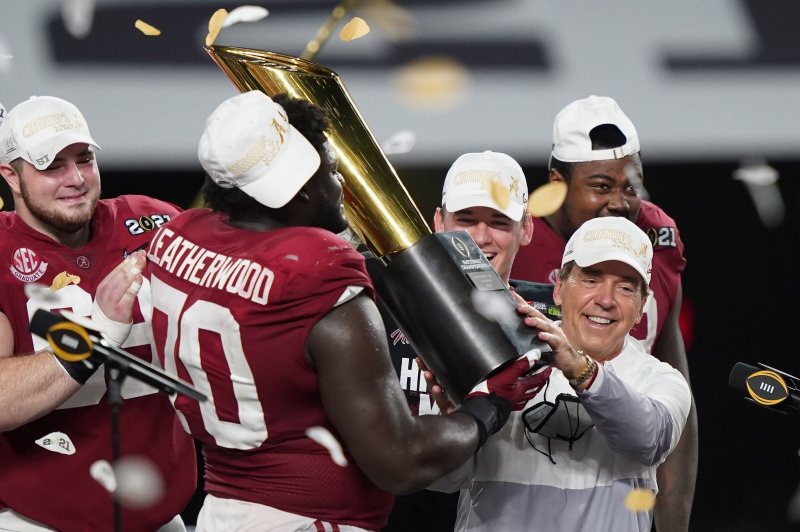 Smith set the record for the most catches in a title game by halftime of the victory at Hard Rock Stadium in Miami Gardens, Fla.

“Heaven knows what he would have done if he had played the whole game,” Alabama coach Nick Saban said in a postgame video conference.

The Heisman Trophy winner had 12 grabs for 215 yards and three scores before he left the game in the third quarter due to a finger injury and did not return.

Smith was named the Offensive Player of the Game. Crimson Tide running back Najee Harris also scored three touchdowns in the victory.

“We had a mission,” Smith said. “Everybody wanted to end things the right way. We just all came to work every day and just put in the work. We got the result that we wanted.”

Alabama’s 52 points were the most Ohio State has ever allowed in a bowl game. The Crimson Tide (13-0) out-gained the Buckeyes 622 to 341 in total yardage.

Jones completed 36 of 45 passes for 464 yards and five scores in the win. HIs yardage total set a record for the most ever in the CFP finale. His 36 completions and five scores also tied CFP title game records.

“I think we are the best team to ever play,” Jones said. “We are so happy to have won this game and put the icing on the cake.

“There wasn’t a lot of pressure. we just wanted to go out there and play the game we’ve played since we were 5 years old.”

With the victory, Saban passed legendary coach Bear Bryant for the most national championships in the history of college football (seven).

“I just love this team so much and what they’ve been able to do. I can’t even put it into words,” Saban said.

The game appeared to be headed toward a second-half shootout before the Crimson Tide took control in the second quarter. Alabama outscored Ohio State 28-10 in the frame to break the game open.

Defensive stops were in short supply for either team early on. The Buckeyes — who dealt with COVID-19-related issues in the weeks before the game — ruled out two starting defensive linemen due to COVID-19 protocol hours before kickoff. Ohio State (7-1) also played without two of their kickers.

Alabama forced Ohio State to go three-and-out on its first drive of the game. The Crimson Tide then put together a 12-play, 78-yard touchdown drive. They capped off the possession with a one-yard rushing touchdown by Harris to take an early edge.

Ohio State running back Master Teague responded on the next drive with a five-yard rushing score and the Buckeyes tied the game with 4:55 remaining in the first quarter.

Alabama regained the lead on its next drive when Smith caught a five-yard touchdown toss at the start of the second quarter.

The Buckeyes offense stalled on the next possession, but Ohio State’s defense got the ball back in a hurry as it forced a fumble from Jones. The Buckeyes then took possession inside the red zone and tied the game with another Teague rushing score.

Harris then scored his second touchdown of the game on the Crimson Tide’s next drive. He caught a pass from Jones and ran up the left flank before he put his foot in the ground and broke away from defenders.

Harris ended the play with a leap over several Buckeyes at the goal line and landed in the end zone. The 26-yard score gave Alabama a 21-14 lead.

The Buckeyes answered once again with a long drive on their next possession, but only came away with a field goal.

Smith then caught touchdown tosses on each of Alabama’s next two drives to push Alabama’s lead to 18 points just before halftime.

The Crimson Tide pushed their advantage to 38-17 on a Will Reichard field goal on the first possession of the second half. Ohio State responded when quarterback Justin Fields threw a 20-yard touchdown pass to Garrett Wilson on the Buckeyes first drive of the second half.

Harris added his third touchdown of the game on Alabama’s next drive for the final points of the night.

“There is a lot to unravel. … I’m proud of the legacy the seniors left behind. We have to give credit to Alabama.”

Fields completed 17 of 33 passes for 194 yards and one score in the loss. Teague had 15 carries for 65 yards and two scores for the Buckeyes.

Monday’s game served as the finale for a COVID-19-riddled college football season, which featured game postponements, cancellations, program pauses and player opt outs. Ohio State and Alabama discussed postponement of Monday’s game due to COVID-19 issues within the Buckeyes program, before the two schools agreed to play the game as scheduled.

“We’ve already started to put together the schedule for the spring, but we all need to get away for awhile,” Day said. “It’s been a long, long ride. Guys miss their families and deserve time with them.”