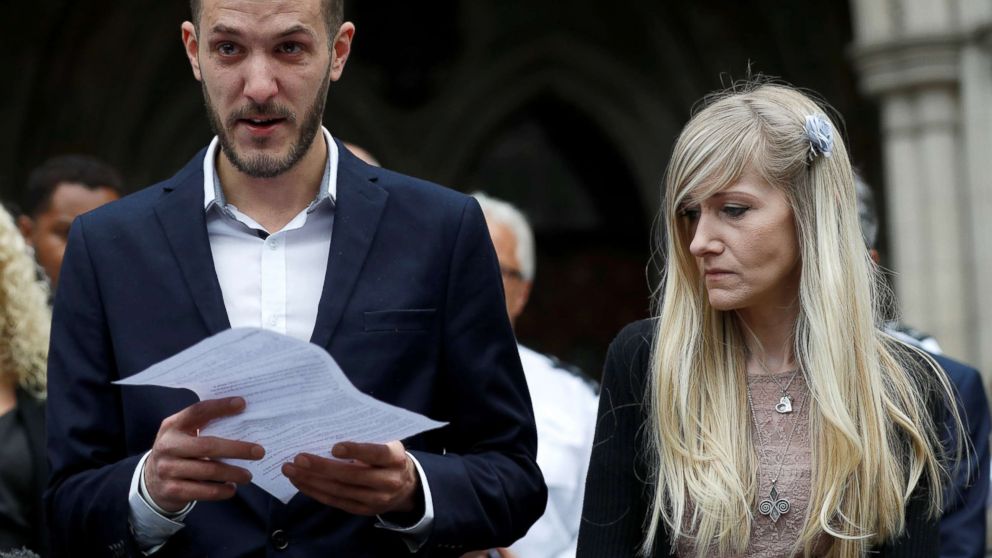 The British parents of 11-month-old Charlie Gard, whose illness has damaged his brain and rendered him unable to breathe on his own, have decided against pursuing their controversial efforts to take him to the United States for treatment after an assessment from a U.S. doctor.

This choice will preemptively end the court proceedings and any possibility of the family transporting Charlie to the U.S.

Charlie’s parents, Chris Gard and Connie Yates, gave a solemn address to the press today about their decision on the steps of the U.K. High Court.

Gard said that it was no longer in his son’s best interest to seek treatment, and that they have decided to let him go and “be with the angels.”

“Our son is an absolute warrior,” Gard said of his baby. “We will miss him terribly.”

A judge extended an invitation to Dr. Michio Hirano, co-director of the Columbia University Medical Center (CUMC) Muscular Dystrophy Association clinic and a professor of neurology at Columbia University in New York City, as well as a doctor from the Bambino Gesu hospital in Rome, to evaluate Charlie’s potential readiness for an experimental treatment for his medical condition, which is known as mitochondrial depletion syndrome.

The disease is rare and causes muscles to progressively weaken, leading to organ failure. Though he is less than 1 years old, the baby has been on life support for several months.

Charlie’s parents, based upon the assessment of the doctors, have opted not to pursue nucleoside therapy, an oral medicine that aims to improve the function of his mitochondrial DNA.

Great Ormond Street Hospital (GOSH) in London, where Charlie has been receiving treatment, had recommended against the child receiving the experimental treatment.

Today, Chris Gard suggested that based upon the assessment of the doctors, they believe their son could have been saved if he were given the experimental treatment at an early stage of life, and said “a whole lot of time has been wasted.”

He asked the press for privacy as the family said their final goodbyes to their son.

Both President Trump and Pope Francis backed the fight by the Gards to pursue an experimental treatment for Charlie.

In addition to this support, protesters have flocked to both the hospital and to the steps of court to voice their support for the Gard family.

But some of that enthusiasm has turned abusive, according to the hospital.

Great Ormond Street Hospital released a statement over the weekend, saying that members of the hospital have received menacing messages, including death threats, in the wake of the case becoming an international story.

“In recent weeks the GOSH community has been subjected to a shocking and disgraceful tide of hostility and disturbance. Staff have received abuse both in the street and online,” Mary MacLeod, the hospital’s chairwoman, said in a statement. “Thousands of abusive messages have been sent to doctors and nurses whose life’s work is to care for sick children. Many of these messages are menacing, including death threats.”

According to McLeod’s statement, families have been “harassed and discomforted” while visiting their children, and that some of the harassment has occurred within the walls of the hospital itself.

“Whatever the strong emotions raised by this case, there can be no excuse for patients and families to have their privacy and peace disturbed as they deal with their own often very stressful situations or for dedicated doctors and nurses to suffer this kind of abuse,” McLeod wrote, adding that the hospital has been in touch with police regarding the threats.

Today, the hospital issued a statement about the decision that was made by the Gard family. In it, the hospital acknowledged the personal strain the family faced throughout the public battle.

“The hearts of all at GOSH go out to Connie Yates and Chris Gard,” the statement began.

The hospital also said it hoped to learn from the ordeal.

“In the months ahead, all at GOSH will be giving careful thought to what they can learn from this bruising court case,” the statement said.