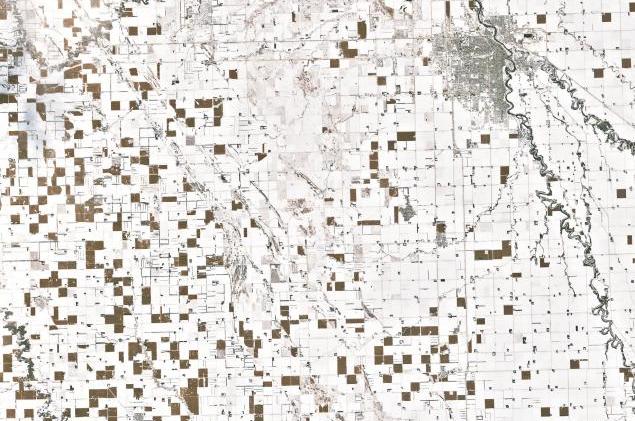 The patchwork pattern of brown and white box-like shapes was created by a unique combination of weather and agricultural phenomena.

After NASA’s satellite captured the image, Daryl Ritchison, director of the North Dakota Agricultural Weather Network, was one of the first to notice the pattern and surmise the cause.

“I’m 100 percent sure it is all corn,” Ritchison wrote on Twitter.

Ritchson was right. Snow in November and December in North Dakota is common, but rarely is so much corn still in the ground in December. According to some reports, not since 2000 has so much corn been left unharvested so late in the season.

Data from the National Agricultural Statistics-North Dakota suggests just 36 percent of North Dakota’s 3.5 million acres of corn have been harvested.

A wet spring delayed corn plantings, and a wet fall meant many corn crops were too full of moisture. Many farmers in the state have either been unable to harvest their corn, due to rain and snow, or have decided to wait until the spring.

If harvested corn is too wet, it must be dried. It’s likely many farmers in North Dakota decided to let their corn dry on the stalk rather than in their barns.

Because the corn is planted in what’s called row closure, with corn touching corn, the snow below is hidden from view, creating the checkerboard pattern captured by NASA’s Earth-observing satellite.