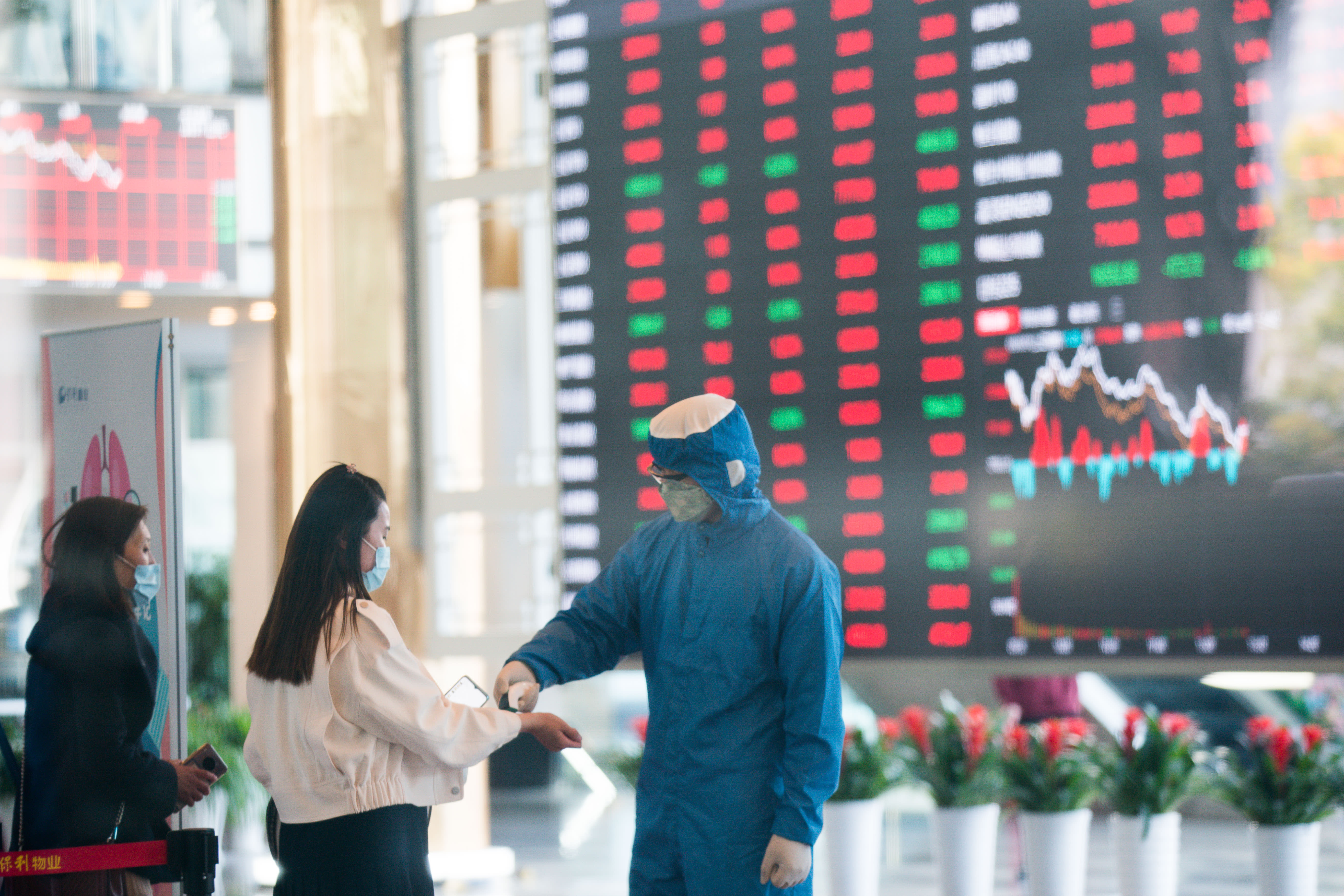 A staff worker wearing a protective mask and protective suit checks a visitor’s body temperature with a temperature gun by a monitor showing the current stock information at the Shanghai Stock Exchange Building on March 20, 2020 in Shanghai, China. Health authorities of China said the country has passed the peak of the COVID-19 epidemic on March 12.

BEIJING — In face of the new coronavirus’ shock to global financial markets, China aims to be a stabilizing force — beginning with its own markets.

Amid calls from global leaders for more international cooperation, it’s still unclear to what extent it’s possible at this point. And when it comes to China, there are pressing domestic issues that authorities need to consider, such as high debt levels, need for foreign capital and slowing economic growth.

The world’s second-largest economy was the first to grapple with what’s officially called COVID-19 after it emerged in Wuhan in late December. The disease has spread to well over 100 countries and killed more than 11,100 people worldwide. As new cases in China dwindle and authorities strive to get businesses up and running again, some emphasize that at this stage, what the country can offer to global markets is its own experience.

professor of finance at Peking University

That indicates both the limits of what China can do on a global level, and how its first-mover status in a highly uncertain pandemic may offer a blueprint for the rest of the world.

“While it’s true the crisis isn’t over for China, (there are) lessons that can be learned from China,” Helge Berger, China mission chief and assistant director in the Asia and Pacific department at the International Monetary Fund, said in a phone interview Friday.

“They also demonstrate that it’s important policymakers have to be ready for what is an unavoidable slowdown in growth. … The economic fallout from the virus is going to be severe,” Berger said. “This is meaningful and requires our attention.”

Fears of a global recession from the impact of the virus have roiled markets, sending U.S. Treasury yields to record lows. The major U.S. stock indexes have plunged from record highs hit in February, and fell Friday to close out their worst week since the financial crisis in 2008. But while the S&P 500 has dropped nearly 29% for the year so far, the Shanghai composite is down just under 10%.

Stabilizing Chinese markets is just one of two areas authorities plan to work on next under the leadership of the State Council’s financial committee, Chen said, referring to the country’s top administrative body.

China is talking to the Fed

The other area is to be an active participant in international coordination of macroeconomic policies, including working with other countries to provide assistance to developing economies hit hard by the virus, Chen said.

Rather than cutting rates or launching large-scale stimulus programs, China’s central bank has been more conservative and on Friday even kept a new benchmark lending rate called the loan prime rate unchanged in March from the prior month. The PBoC has made some targeted interest rate cuts, and announced hundreds of billions of yuan in special loans to support businesses hit hard by the virus.

“China really wants to see more money coming into the country, which is why it will not cut its interest rates anywhere near (other countries and is) unlikely to depreciate its currency,” Michael Pettis, professor of finance at Peking University, said Sunday in a phone interview.

The yuan, or renminbi, has hovered in a range near 7 against the U.S. dollar, and the PBoC’s Chen said Sunday the central bank expects the currency to fluctuate around that level. The officially set yuan midpoint rate has weakened more than 1.4% against the U.S. dollar, but climbed more than 4.75% against an official basket of currencies so far this year, according to data from Wind Information.

More importantly for foreign investors, the average daily spread, or difference between, the U.S. and Chinese 10-year government bond yield, was 172 basis points between Feb. 20 and March 19, according to China’s foreign exchange regulator. That makes Chinese assets quite attractive to foreign investors, and addresses one of Beijing’s long-term goals to increase international institutional holdings of yuan-denominated assets.

Pettis expects foreign capital to enter China as a result, helping Beijing expand the domestic money supply and potentially turn the country into a far greater consumer of world production than an exporter.

China’s financial markets are large, but are still relatively closed to the rest of the world, in contrast to the country’s deep ties with global supply chains and international trade. Foreign capital accounts for less than 4% of the tradeable A-share market capitalization, according to the China Securities Regulatory Commission.

“I think it’s certainly a wise strategy for the party to present themselves as a beacon of stability globally, but I don’t think that’s the reality,” Isaac Stone Fish, a senior fellow at the Asia Society, said in a phone interview Monday. “For one, we don’t have a good sense of where China’s financial system is, and we’re going to have a much less nuanced (sense) going forward,” he said, referring to last week’s expulsion of American journalists at three U.S. newspapers.

Last week, official data painted a dismal picture of growth, prompting many economists to predict a contraction in China’s GDP for the first quarter, and growth in the low single-digits for the entire year.

“Ensuring that there is a strong recovery from what will be a very sudden hold in Q1 is a very strong contribution to the world on its own,” Berger said.

“We’re heartened by the fact the (yuan) is fluctuating flexibly,” he said. “It allows policymakers to focus on domestic issues.”

Those issues include problems of high leverage and slowing economic growth that Beijing has tried to tackle for years since the global financial crisis. The virus has also increased pressure on the privately run, small and medium-sized companies that contribute to the majority of growth and jobs in China.

As for global markets, the PBoC’s Chen sounded a tone of moderation on Sunday, saying, “It is too early to conclude right now whether the world has entered a financial crisis.”