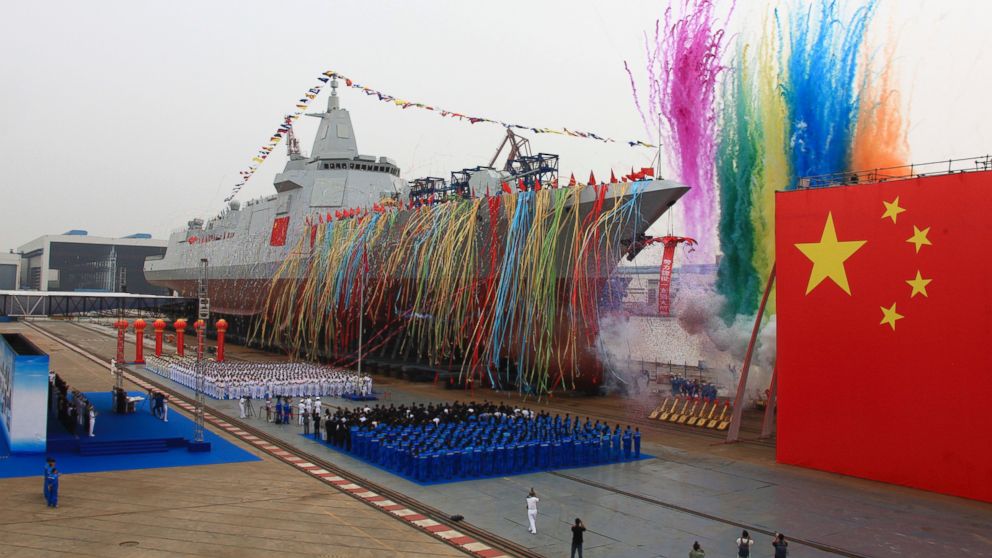 China’s increasingly powerful navy launched its most advanced domestically produced destroyer on Wednesday, at a time of rising competition with other naval powers such as the United States, Japan and India.

The first 10,000-ton Type 055 entered the water at Shanghai’s Jiangnan Shipyard on Wednesday morning, the navy said in a statement.

It said the ship is equipped with the latest air, missile, ship and submarine defense systems. China is believed to be planning to produce four of the ships.

“The launch of this ship signifies that our nation’s development of destroyers has reached a new stage,” the navy said.

A photo on the navy’s website showed multicolored streamers being shot out of tubes while sailors and shipyard workers stood dockside next to a massive Chinese flag. It said the chief of the People’s Liberation Army’s General Armaments Department, Zhang Youxia, presided over the ceremony, in which a bottle of champagne was broken over the ship’s bow.

The Type 055 is significantly larger than China’s other modern destroyer, the Type 052, representing the rising sophistication of China’s defense industries. Once heavily dependent on foreign technology, China in April launched its first aircraft carrier built entirely on its own, based on an earlier Ukrainian model.

In terms of displacement, it is roughly equivalent to the Arleigh Burke class of destroyer.

China’s navy is undergoing an ambitious expansion and is projected to have a total of 265-273 warships, submarines and logistics vessels by 2020, according to the Washington, D.C.-based Center for Naval Analysis. That compares with 275 deployable battle force ships presently in the U.S. Navy, China’s primary rival in the Asia Pacific, with the once-yawning gap between the two narrowing rapidly.

China says it needs a powerful navy to defend its 14,500 kilometers (9,010 miles) of coastline, as well as its crucial maritime shipping routes.

However, it also appears increasingly willing to challenge actions by the U.S. — long the region’s pre-eminent military power — especially in the South China Sea, which China claims virtually in its entirety.

Beijing has also long nurtured resentment against Japan over its past invasion of China, and their dispute over a group of tiny, uninhabited islands in the East China Sea has at times threatened to break out into open confrontation.

India, meanwhile, shares a disputed border with China and has grown increasingly concerned over the Chinese navy’s growing presence in the Indian Ocean, facilitated in part by Beijing’s close alliance with New Delhi’s arch rival, Pakistan.