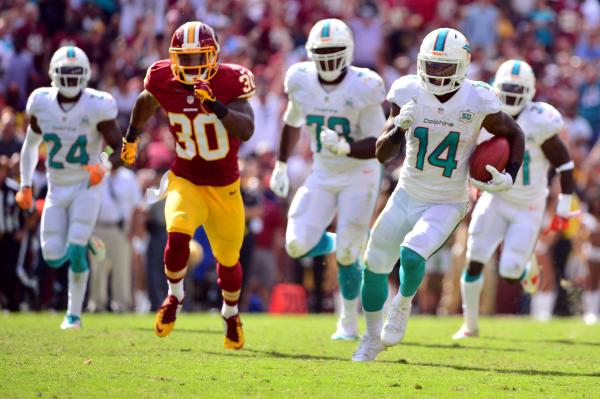 From not being able to properly file paperwork to consummate a trade in October to making three trades in a matter of just hours, the Cleveland Browns left many in the NFL with their heads spinning.

The same team that has won only one game in two years and flubbed finalizing a trade for Cincinnati quarterback AJ McCarron at the trade deadline pulled off three deals in a matter of a few hours on Friday.

According to NBC Sports’ Pro Football Talk, Friday’s trades “stunned others who had been negotiating potential moves with the Browns.”

First, Cleveland acquired wide receiver Jarvis Landry from the Miami Dolphins for the relatively cheap price of two mid-round draft picks: one this year and one in 2019.

Then, the Browns dealt the 65th pick in this year’s draft to the Buffalo Bills for starting quarterback Tyrod Taylor.

Moments later, last year’s starting quarterback DeShone Kizer was sent to the Green Bay Packers for defensive back Damarious Randall, who is a good bet to start at cornerback for the Browns this year.

General manager John Dorsey wasn’t done as, on Saturday, he jettisoned the team’s first-round pick in 2015, defensive tackle Danny Shelton, and a pick in this year’s draft to the New England Patriots for a 2019 draft pick.

The Browns had been talking to numerous teams about many players, according to Pro Football Talk. If talks stalled, Dorsey moved on quickly to get deals done, leaving some teams in the dust, thinking there was still time to negotiate.

The rapid-fire succession of moves left some teams shocked. Even when they weren’t making moves, the Browns were making news.

ESPN’s Adam Schefter on Sunday tweeted: “Source: Browns won’t be making any trades today, a rarity.” So there’s that.

None of the deals can be finalized until 4 p.m. ET Wednesday at the start of the new league year when free agency opens.