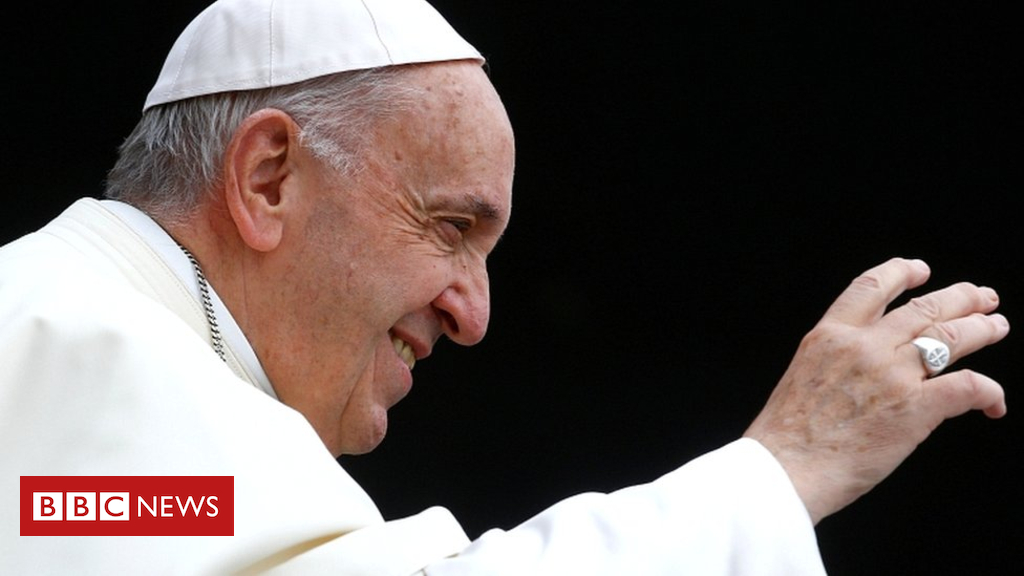 Pope Francis has said climate change is a challenge of “epochal proportions” and that the world must convert to clean fuel.

“Civilisation requires energy, but energy use must not destroy civilisation,” he said.

He was speaking to a group of oil company executives at the end of a two-day conference in the Vatican.

Modern society with its “massive movement of information, persons and things requires an immense supply of energy”, he told the gathering.

“But that energy should also be clean, by a reduction in the systematic use of fossil fuels,” he said.

“Our desire to ensure energy for all must not lead to the undesired effect of a spiral of extreme climate changes due to a catastrophic rise in global temperatures, harsher environments and increased levels of poverty.”

The world needed to come up with an energy mix that combated pollution, eliminated poverty and promoted social justice, he added.

As many as one billion people still lack electricity, he said.

Under Pope Francis’ leadership, the church has moved to confront the business world on a range of subjects from poverty to tax havens and complex financial securities.

“You can see the effects of climate change with your own eyes and scientists tell us clearly the way forward.

“All of us have a responsibility. All of us. Some small, some big. A moral responsibility, to accept opinions, or make decisions. I think it is not something to joke about.”

Quoting from the Old Testament, he then said: “Man is stupid, a stubborn, blind man.

“Those who deny it [climate change] should go to the scientists and ask them. They are very clear, very precise.”

“We have come to see ourselves as her lords and masters, entitled to plunder her [the Earth] at will.

“The violence present in our hearts, wounded by sin, is also reflected in the symptoms of sickness evident in the soil, in the water, in the air and in all forms of life.

“We need only take a frank look at the facts to see that our common home is falling into serious disrepair.

“I urgently appeal, then, for a new dialogue about how we are shaping the future of our planet.”

The unprecedented conference brought together oil executives, investors and Vatican experts who, like the Pope, back scientific opinion that climate change is caused by human activity and that global warming must be curbed, Reuters reports.

It is being held behind closed doors at the Pontifical Academy of Sciences, in a secluded 16th-Century villa in the Vatican gardens.

Called Energy Transition and Care for Our Common Home, it has been organised by the Catholic University of Notre Dame in South Bend, Indiana.

Consumption of oil and gas is expected to grow, according to analysts, remaining the world’s largest sources of energy for the foreseeable future.

ExxonMobil alone has announced plans to increase oil production in the US and start more than two dozen projects worldwide, adding more than one million oil-equivalent barrels per day.

The firm says it has taken steps to reduce emissions in its own operations, spending $ 9bn on the effort since 2000.

But it maintains that growing demand for energy cannot be met by alternatives like wind and solar power alone.

Renewable sources provided about 18% of energy consumed in 2015, with forms like solar, wind and hydropower representing less than 10%, according to the International Energy Agency.

The US Energy Information Administration expects oil and other liquids to continue to account for almost a third of energy until 2040.