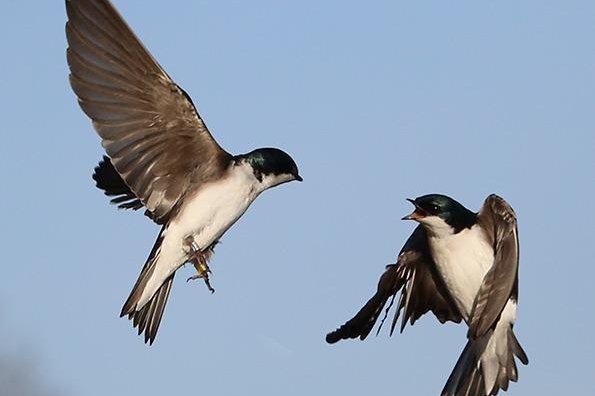 March 22 (UPI) — New research suggests a single competitive interaction can leave a lasting genetic impression on the brains of songbirds.

Competition for territory, mates and prey drive evolution, but evolutionary changes are often only visible across vast timescales.

Scientists at Indiana University wanted to find out how competition inspires genetic changes among individual songbirds.

For the latest study, published this week in the journal PNAS, researchers worked to zoom in on these short-term changes in order to better understand how competition in the short-term inspires longterm genetic shifts.

“The project was born out of wanting to extend earlier, mostly laboratory work, from bees and mice and fish, but apply it to dynamic and interactive competition in the wild — genuine competition that occurs as animals fight for the resources they need as they struggle to reproduce,” study co-author Kimberly Rosvall, assistant professor of biology at Indiana, said in a press release.

Scientists chose to measure the influence of competitions on wild tree swallows, which breed in artificial cavities each spring — in this case, nest boxes put up by Indiana biologists.

The researchers were able to induce competition among wild females by removing the number of nest boxes while they roosted in trees overnight.

The next morning, the birds awoke to find fewer nesting sites and were forced to fight it out for access to the limited resource. A day later, researchers reversed course and boosted the supply of nest boxes.

Scientists collected samples from the swallows during the peak of competition, as well as two days after the end of the competitive period.

They analyzed changes in gene expression and epigenetic marks in the areas of the brain associated with socialization. Samples from different groups of swallows offered the research team a baseline for comparison.

The samples also revealed changes in aggression-related gene pathways during the days following competition, which suggests the experience of competition not only triggers short-term genetic trade-offs, but also longterm shifts — shifts that might help birds respond to future competition.

“It’s exciting to think about how a totally normal competitive event for these birds — fighting for a territory — can have these lasting and potentially beneficial effects on their brain, ‘socially priming’ them to better handle competition in the future,” said lead author said Alexandra Bentz.

“To see competition leave a mark on the genome of the brain that outlasts the event itself is pretty amazing,” said Bentz, a postdoctoral fellow in the Rosvall lab.