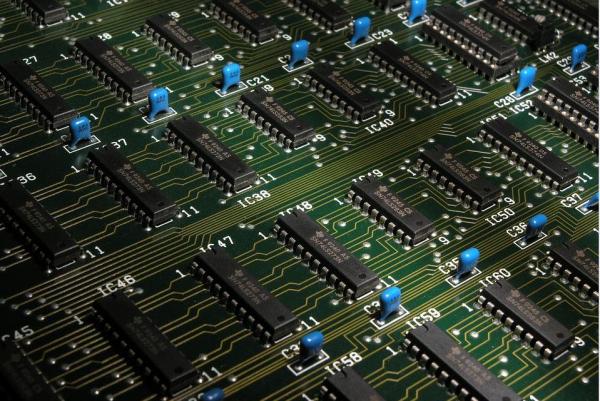 Sept. 13 (UPI) — Printing electronic circuitry with copper nanoparticle ink and green laser light can be more cost beneficial and efficient, according to a study.

Researchers at Soonchunhyang University in South Korea studied the thin-film printing technique instead of the conventional methods, based on laser power, scanning speed, pre-baking conditions and film thickness effects. Their findings were published this week in the journal AIP Advances.

Nanoparticles in metallic inks have an advantage over bulk metals because of their lower melting points in the circuitry manufacturing.

Originally the researchers, led by Kye-Si Kwon, tested silver nanoparticle ink but found it is costlier. Then, they studied studied copper, which is derived from copper oxide.

Although copper’s melting point of copper is nearly 2,000 degrees Fahrenheit, copper nanoparticles can be brought to their melting point at just 300 to 930 through sintering. Then, they can be merged and bound together.

The nanoparticles are heated by the absorption of light.

“A laser beam can be focused on a very small area, down to the micrometer level,” the researchers said.

Heat from the laser converts copper oxide into copper and promotes the conjoining of copper particles through melting.

The researchers decided a green laser — in the 500- to 800-nanometer wavelength absorption rate range — would be ideal for their purposes. And because green lasers in this role have not been reported elsewhere, Kwon wanted to see how it worked.

The researchers used commercially available copper oxide nanoparticle ink that was spin-coated onto glass at two speeds to obtain two thicknesses. They prebaked the material to dry out most of the solvent before sintering to reduce the copper oxide film thickness and to prevent air bubble explosions when the solvent suddenly boils during irradiation.

They concluded that the prebaking temperature should be slightly lower than 400 degrees F.

In searching for optimal settings of laser power and scanning speed during sintering, they worked to enhance the conductivity of the copper circuits. The found the best results were produced with laser power from 0.3 to 0.5 watts. To reach the desired conductivity, the laser scanning speed should be at least 10 millimeters per second and less than 100.

The researchers concluded that sintering reduces film thickness by as much as 74 percent.