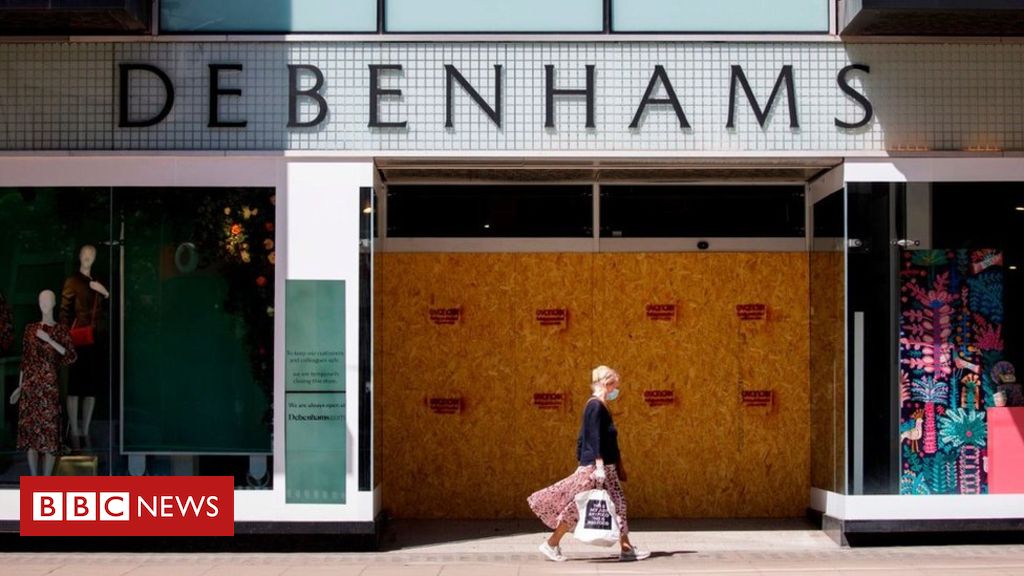 Some restaurant employees at crisis-hit Debenhams say they will be made redundant at the end of the month.

Staff say they will not receive redundancy pay from the company and will not have paid notice periods.

They heard during a conference call on 28 May that administrators had decided to close a majority of store cafes.

Debenhams said it was pursuing a “leaner and more flexible operating model” to help it adapt to changes in the retail industry.

The company fell into administration for the second time in a year in April.

Catering staff were told in an email that, because they were losing their job on 31 May, they were no longer eligible for the government’s Coronavirus Job Retention Scheme that pays 80% of salaries.

In one email seen by the BBC, staff were told that administrator Geoff Rowley advised “we are unable to keep people on furlough if there is no job for them to return to”.

In a separate email, staff were told that claims for redundancy payments would have to be made through the UK government.

Louise Crowe, who worked in the Debenhams restaurant in Barrow-in-Furness, told the BBC she had no idea she would be made redundant during the conference call.

“A lot of us were wondering what this would be,” she said. “Would it be getting us back into work and how we would do it?

“He told us the administrators have advised us not to reopen the restaurants, so you’re all redundant. We’ll get our final pay [on Friday] and that’s it basically, our contracts are terminated from the 31 May.

“In this present climate there’s going to be a lot of people looking for jobs, we’re all in the same boat.

“Tomorrow I’ll start being proactive and hope for the best. Hopefully when things pick up there might be more jobs available.”

Jessica Riseley said she had only worked at a Debenhams restaurant for 16 weeks before the lockdown began.

“I don’t fall under the redundancy category to claim any money,” she said. “I have a young family to feed, mortgage to pay, it’s totally unexpected.

“The government announced they’d pay furlough to October. I don’t understand why they couldn’t keep us on furlough until we found a job.”

She added: “It’s a struggle with only 80% of your normal wage anyway, but to then have nothing… I’ve got three children, my husband’s a car salesman, his payment is based on commission.

“It’s going to be tough, it’s probably going to be a job I didn’t want to have, but I have to do it for the sake of my children.”

Sarah Smith told the BBC she had worked in a Debenhams restaurant since October 2016.

“Debenhams are getting away with not offering anything because they’re in administration,” she said.

“I’ve looked into it and because of my age I’ll only be getting one and a half weeks’ worth of redundancy pay – half a week for each year I’ve worked there.

“It’s pretty dire. But I’ve seen news about protests in Ireland about the lack of a redundancy package, so maybe we’ll see something similar in the UK.

“I think it’s really wrong that they’ve treated us like this.”

A Debenhams spokesperson told the BBC that, despite the restaurant redundancies, it is preparing to reopen “the vast majority of its stores from 15 June” following negotiations with the landlords of 120 sites.

They added: “In the context of a retail industry undergoing profound change, the management team is working on the future shape of the group, with a view to seeking an exit from administration as a going concern.

“With a leaner and more flexible operating model, Debenhams will have the ability to adapt to what are likely to be fundamental shifts in the future trading environment.”