March 28 (UPI) — South Korean health officials said Saturday that for the first time since the country’s first confirmed coronavirus case, there have been more recoveries than active cases.

According to the Korea Center for Disease Control and Prevention, 4,881 cases are recovered and 4,597 are active.

“We believe this to be the result of selfless efforts made by the public, who worked to maintain disinfectant process while actively participating in social distancing,” said KCDC Deputy Director Kwon Joon Wook during a regular briefing.

The Johns Hopkins University global trackerindicates that South Korea has the 10th highest number of cases in the world with 9,478 cases and 144 deaths. Worldwide, there have been at least 615,000 cases and 28,700 deaths.

Wook stressed that Koreans “must not let complacency take place” as some infections are still causing deaths.

He added that people should not break from strict social distancing measures until at least April 5, or else face fines or even a yearlong imprisonment.

Worldwide, the United States has topped the list of the number of cases with 104,860 cases and 1,711 deaths, according to the global tracker Saturday morning.

Italy has the second highest number of cases in the world — 86,498 — and has been hardest hit in regard to number of deaths from the coronavirus pandemic. The country has reported 9,134 deaths and recorded its worst 24 hours Friday with 919 deaths from the respiratory illness between Thursday and Friday alone.

Spain is the second-hardest hit country in Europe with 72,248 cases and 5,690 deaths. It also reported Friday a record one-day figure for fatalities after 769 people died in 24 hours.

Germany has the fifth most cases in the world, according to the global tracker. Still, with 399 deaths in Germany, the death rate has been substantially lower than Italy, Spain and Britain.

India, which has 1.3 billion people, the second-highest population in the world next to China, has the world’s largest coronavirus lockdown and thousands of migrant workers are trying to leave major cities after the lockdown left them without jobs or pay.

More than 9 million migrant workers a year move from India’s rural areas to cities to find work at construction sites or factories and send money back to their families, according to government statistics. Now, many of them are left with no choice but to return home since those businesses are closed due to the lockdown.

India has 933 confirmed cases and 20 deaths, but the country has been criticized for not testing enough. Its testing rate is 6.8 tests per million, one of the lowest rates in the world. The country initially insisted on testing only those who traveled to high-risk countries or had come in contact with an infected person or health workers treating coronavirus patients, but later said anyone admitted to the hospital with severe respiratory distress should also be tested.

Only state labs in India were allowed to test for coronavirus initially and now permission has been extended to several private labs. In the past few days, the country has increased testing as the first made-in-India coronavirus testing kits reached the market.

The government-run Indian Council for Medical Research said Mylab was the only Indian company to achieve 100 percent accurate results.

Virologist Minal Dakhave Bhosale, Mylab research and development chief, submitted the testing kit to the National Institute of Virology to evaluate on March 18.

“Our kit gives the diagnosis in two and a half hours while the imported testing kits take six or seven hours,” she said. 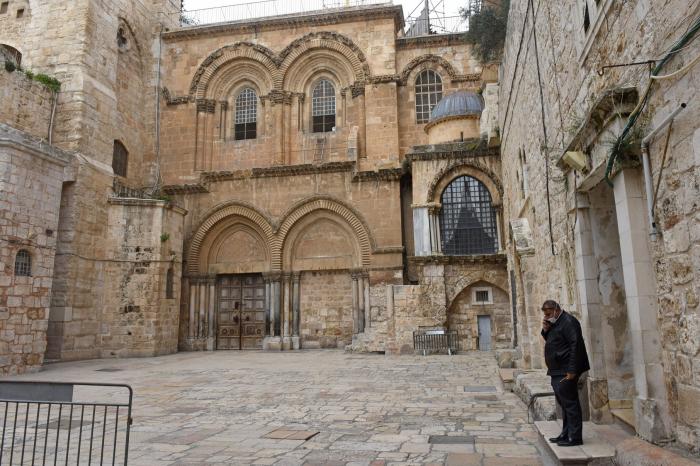 A Palestinian wears a protective mask outside the Church of the Holy Sepulchre, closed because of the coronavirus restrictions, in Jerusalem’s Old City on March 28. The Israeli government has imposed tight restrictions of movement, leaving only essential stores open in an effort to stop the spread of the virus. Photo by Debbie Hill/UPI | License Photo